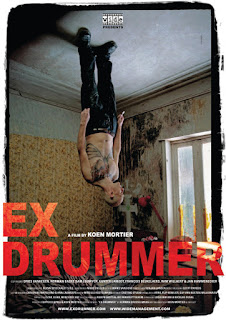 How do you even begin to convince others to watch a film with a character called 'Big Dick', whose grotesquely large appendage literally takes center stage in parts of this extremely violent and offensive black comedy. In a surreal sequence, Big Dick even shows a friend around his girlfriend's vagina, given that it has standing room for two men after all the years it has been subject to his engorged member. If this description repulses you, then you should probably read no further. However, if you are intrigued, then welcome to your new favourite film...

Ex Drummer oozes with an anarchic punk rock sensibility from the outset as we are introduced to three handicapped musicians who are seeking a disabled drummer to complete their line-up for a special one-off performance in a music competition. They reach out to an infamous music producer, Dries, to join their band and he reluctantly agrees after they come to a decision that his handicap is his inability to play the drums. The trio comprising of a deaf bassist, an ultra-violent lead singer and a gay guitarist settle on the moniker of 'The Feminists' as suggested by Dries, and what follows is a dark and delirious journey into the Belgian music scene that ends in violence and bloodshed. 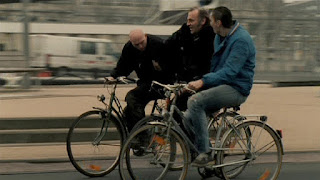 Part of the film's instant appeal is its bold stylistic choices; the opening credits show a sequence played in reverse where the band's core members travel on bicycle to Dries' house, causing mayhem on the way, as a thumping rock song accompanies their antics. Whenever the film takes us to the singer's dilapidated flat he is always pictured upside down, pacing along his ceiling, whilst visitors to his home are subject to the usual restrictions of gravity. A heated discussion about women drivers and their implied inability to park gives rise to a bizarre imagined scene where the lead singer is run over by the same car at least a dozen times as it attempts to reverse into a parking space. These memorable and captivating flourishes give Ex Drummer a hyperactive kick, exposing you to the twisted sense of politically incorrect humour that coarses through its anarchistic veins. 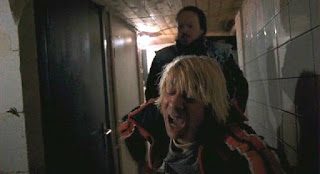 As well as subjecting the viewer to sexist and homophobic slurs, Ex Drummer features rape, murder, drug abuse and a whole host of disturbing nastiness that batters you senseless throughout its runtime. Without the black comedy this would be a soul crushing film - its depravity appears to know no bounds - but as it stands Ex Drummer successfully balances the horrific elements with a dark playfulness. The gallows humour chimes well with the shock factor, and these two strands are combined in a way that delivers an experience genuinely unlike any other. 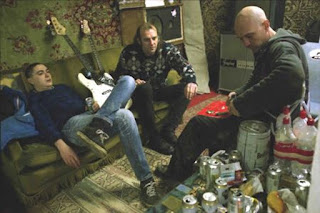 Despite the deplorable actions of The Feminists and their unflattering character traits, you cannot help but warm to them to a certain extent. This is made possible by the arrogant and manipulative behaviour displayed by Dries whose cruel treatment of his new band leaves you despising his cold and calculated persona the most. The original band members may be foul individuals but their unfortunate upbringings, uncontrollable addictions, and testing living arrangements play a part in their temperaments, whereas the drummer has no excuse for his malicious and downright nasty ways.

Adapted from a well known book in its native country, Ex Drummer pushes the boundaries of acceptability and revels in its characters intense behavioural issues, serving up scene after scene of gross and uncompromising scenarios that are guaranteed to make your stomach churn. Comparisons have been made to Trainspotting and these are well founded to an extent but Ex Drummer inhabits a plane of existence all of its own. Like Trainspotting the editing is predominantly fast and frenetic but also comprises a handful of impressive long takes, and these are enhanced by the excellent soundtrack choices that capture the aggression and vigour of the film's ambience. 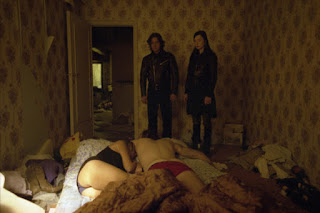 The striking soundtrack features a sizeable chunk of riotous punk music but also delves into other genres to bring a vibrant soundscape to the proceedings. A cover of Devo's Mongoloid is a fitting number adopted by The Feminists and the other fictional bands they are up against bring riffs and noise that matches their larger than life personalities, particularly Big Dick's band, 'Harry Mulisch'. Fans of heavy rock will delight in the disheveled venue that hosts the chaotic concert as booze flies through the air and violence erupts in the form of swirling mosh pits. Those who have had the pleasure of similar gig-going experiences will be reminded of how much fun the pure carnage can sometimes be, and may even be saddened by the fact that The Feminists are only a fictional band, who we will never see perform in real life.

A slightly jarring but welcome change of pace towards the end evokes the best of dream-like (and incredibly gory), art house horror. Each of the characters are given the opportunity to summise their pitiful existences and do so in a philosophical manner, providing the film with a thought-provoking edge as they reflect on their mistakes and regrets. This contrast to the energetic rush that precedes it brings the film to a sublime conclusion, almost at odds with the insanity we have witnessed up to now, as the characters are left as drained and exhausted as we are from the relentless headrush we have experienced. 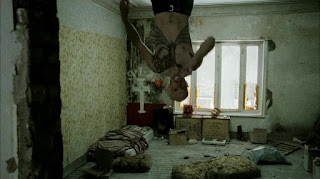 This slick and flavourful film is practically begging to be considered a cult classic and is, quite frankly, deserving of the accolade. Director Koen Mortier and his colourful cast of crazy musicians have delivered an unforgettable kinetic fusion of music, black comedy and crime that toys with elements of horror and lingers in your mind long after The Feminists have stormed the stage. Its bold and uncompromising vision is bleak but enthralling and its unstoppable momentum propels you into a world of mayhem that degenerates into sheer lunacy. You may laugh, you may be offended, (you may even be deeply disturbed) but you will certainly be blown away by this provocative insight into the perverse lives of a fictional band and its dysfunctional members.

If you take the time to watch Ex Drummer then it would be awesome if you could also take the time to let me know what you thought of it, either by commenting below or tweeting me @filmbantha. Thanks, and enjoy!


For previous instalments in the series click here
Posted by Filmbantha at 20:05