Imagine if True Romance was a light-hearted Romantic Comedy where two lovers become entangled in a web of crime and you will not be far off the mark. Date Night is remarkably similar to True Romance in terms of plot but replaces the style and panache of Tarantino’s writing with slapstick humour and bumbling criminals. However, don’t let that get your hopes up, True Romance is a classic, Date night is mere popcorn fodder despite being surprisingly enjoyable.

Tina Fey and Steve Carell play the Fosters, a hapless couple whose marriage is on its last legs, and when their attempt to rekindle the flame goes awry they are mistaken for two thieves who have stolen from one of New York’s leading crime lords - and he is not a happy man. Throughout their eventful date night the Foster’s are thrown into one unbelievable situation after another and while most are amusing, some fall flat, but the excellent cameos are sure to keep you entertained when the humour dries up. In fact, Shawn Levy should be glad that he managed to recruit such an appealing cast; the performances improve on what would otherwise be a lacklustre comedy.

Steve Carell shines as Phil Foster, with his warped sense of humour and deadpan acting, and Mark Wahlberg is excellent as the ex colleague who comes to the aid of the Fosters. Most of the humour comes from Carell’s performance, he is on his usual top form, and fans of Anchorman and the 40 Year old Virgin will not be disappointed. As he gains confidence throughout the night, Phil Foster gradually regains the love and trust of his wife, it’s the usual cliché but here it actually works, and you can’t help but empathise with the endearing couple.

If Date Night was any longer, it would have dragged but thankfully the snappy pacing coupled with a relatively short running time of 88 minutes was perfect for this style of comedy, and funnily enough would make it a perfect film to take a potential partner to see.

Let's say Date Night is a female friend;  I certainly enjoyed spending an evening with her, and it would have been even better with a few drinks. I might save her number, but only with the intention of seeing her again if nothing else was on the cards. In other words, check it out but don’t get your hopes up!

The 40 Year Old Virgin
True Romance
The Apartment
The Naked Gun Trilogy
Posted by Filmbantha at 18:58 No comments:

Drew Barrymore’s directorial debut has all the makings of a cult classic, from the impeccable indie rock soundtrack to the impressive cast credentials, but unfortunately fails to deliver. Crude, unfunny jokes pepper a storyline chock full of clichés and corny dialogue, whilst the actresses struggle to bring life to the two-dimensional characters they are portraying.

The storyline focuses on a teenage misfit, Bliss Cavendar, coerced into performing at beauty pageants by her parents, whilst secretly yearning to explore the wilder side of life when she discovers a roller derby league not far from her home in Austin.  As usual in these coming of age stories, Bliss meets a guy, falls out with her parents and flourishes within a new group of friends after overcoming a number of obstacles. This is all very pleasant but far from original, making it very easy to predict the outcome of the movie. 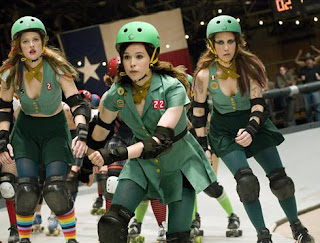 The inclusion of Ellen Page as the story’s heroine is a wise move by Barrymore, fans of Juno desperate to see more of the star will certainly flock to the movie, if only to be disappointed. Despite this, Page puts in a fairly  impressive performance, proving that she is a talented actor, even when presented with an average script.

I am sure that the target audience of twelve year old girls will get a lot out of Whip It but I wouldn’t recommend this film to anyone else due to its lack of broad appeal. Whip it would definitely pass time during the April showers but I would prefer to get wet than suffer through this pre-teen chick flick once more.

Juno
Little Miss Sunshine
Me Without You
Bend It Like Beckham
Posted by Filmbantha at 12:29 No comments: