New Release - We Are Still Here 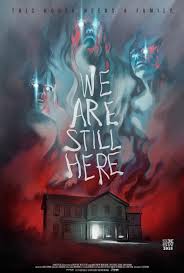 Escaping to an old house on the outskirts of a sleepy village seems to be the best move for grieving couple Paul (Andrew Sensenig) and Anne (Barbara Crampton) Sacchetti after the untimely death of their teenage son in a car crash. Anne is certain that his presence is felt in their new home and an unannounced visit from their eerie neighbours, who regale the Sacchetti's with the history of its previous occupants, only serves to exacerbate these thoughts that something is not quite right with their house. Against Paul's better judgement, Anne invites the parents of her dead son's best friend to stay in the hope that his mother, May Lewis, who is a practicing spiritualist, can shed some light on the strange occurrences that are troubling the household.

Much like Ti West's excellent slow burn horrors The Innkeepers and The House of the Devil, We are Still Here tips its hat to seventies genre films that rely on mood and atmosphere to build up an almost overwhelming sense of dread. The house is as much a character as its inhabitants (both living and the dead), with the measured camerawork slowly exploring the dark recesses of the basement and the weathered exterior of the creaking house, which enhances the feeling of isolation and showcases the unsettling nuances of the fittingly creepy setting.

Comic relief arrives in the form of Jacob Lewis (portrayed here by the ever watchable Larry Fessenden), a jovial hippy who indulges in illegal substances and revels in the opportunity to hold a seance despite his wife May's concerns. Paul Sacchetti's seemingly humourless and deadpan persona is initially at odds with Jacob's lackadaisical approach to communicating with the dead but the family soon have far bigger worries to contend with as all hell breaks loose in their household. 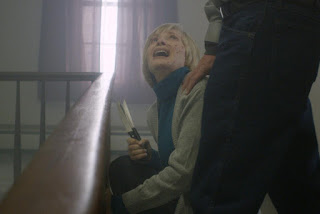 Those expecting a crescendo of traditional ghostly scares may be slightly disappointed by the jarring change in direction We Are Still Here takes towards the latter part of the film; although the originality of the storyline is one of its strongest points, it is sure to divide audiences, as the denouement is at odds with the subtle scares that come before it.

This refreshing take on a somewhat oversaturated genre is a welcome hybrid of horror that should be approached with an open mind, and a spare change of underwear. We Are Still Here demonstrates director Ted Geoghegan's burning passion for the genre and might just be one of the best new horrors of 2015.

The Innkeepers
The Changeling
The House of the Devil
Insidious

Posted by Filmbantha at 13:30 No comments: