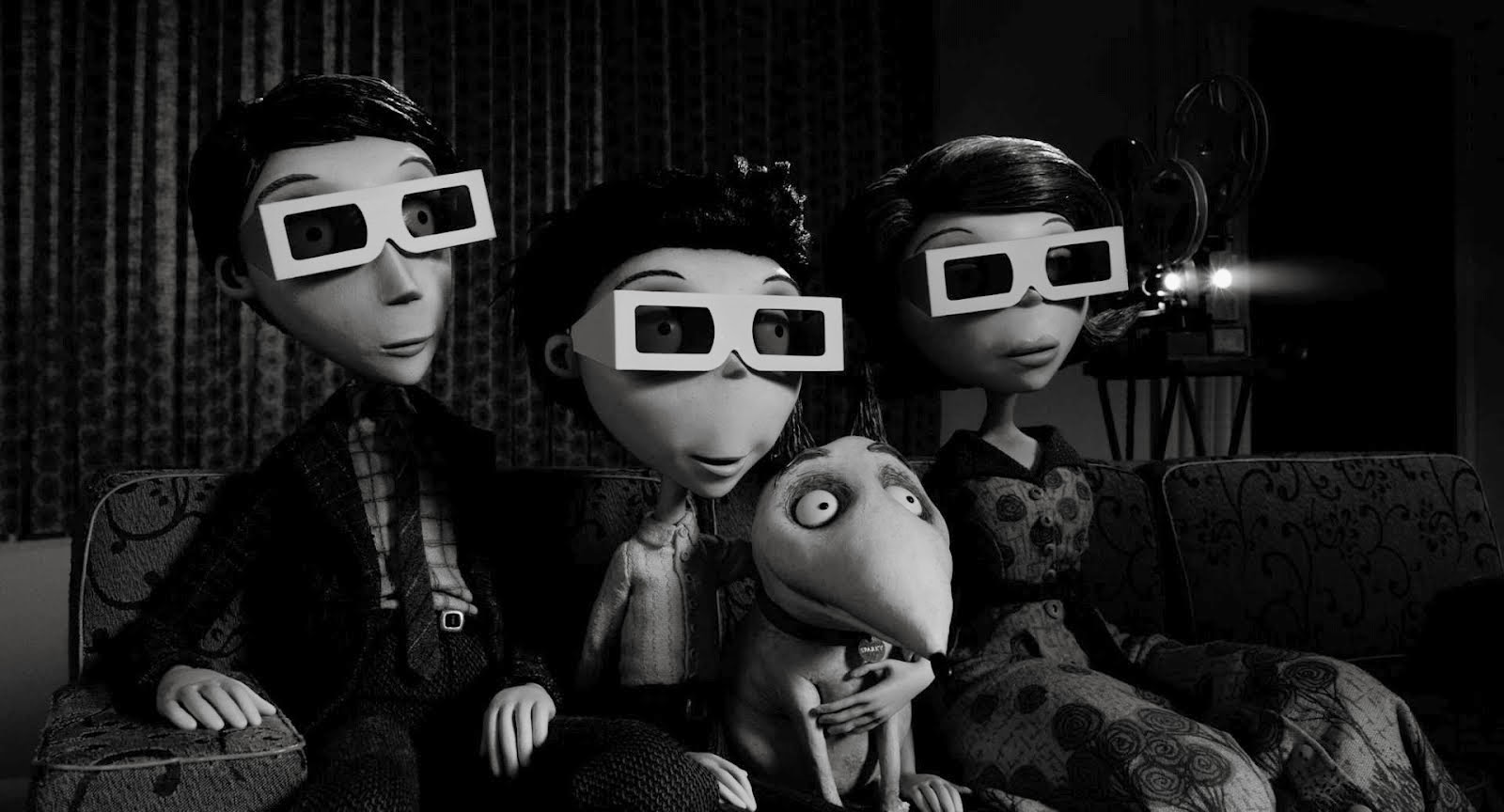 Tim Burton must have a very bittersweet taste from the release of his latest stop-motion animation, Frankenweenie, as it was his short of the same name that originally got him fired from Disney when it was deemed too frightening for children back in 1984. He has long since buried the hatchet and returned to his rightful home at Disney where his career began as a fledgling animator, and his fascination with all things dark and macabre has led to an impressive and varied filmography, as well as gaining him legions of devoted fans.

His latest offering is a step up from his recent underwhelming efforts, Dark Shadows and Alice in Wonderland, and is return to form for a director well known for his exceptional work in stop-motion animation. Loosely re-worked from his original live action short and extended into a full length feature, Frankenweenie is a monochrome stop-motion animation horror for kids, which on paper may sound over-ambitious, but given Burton's warped ideas and his incredible attention to detail, children and adults alike are bound to succumb to the twisted charm of Frankenweenie.

In a role that may well be reminiscent of Burton's own childhood, Charlie Tahan voices Victor Frankenstein, an outsider who spends his spare time making monster films on a super 8 camera with his dog Sparky often taking centre stage as creature that destroys miniature cities. Encouraged to take part in sports by his father, Victor's dreams come crashing down when Sparky is critically injured during a baseball game and his school science project may be the only way he can restore life to his beloved dog. When Victor's classmates discover the truth behind Sparky's return it is not long before the whole town is caught up in a disaster of monstrous proportions.

Burton's choice to present the film in black and white lends Frankenweenie an eerie atmosphere that combines well with the retro design of locations such as a traditional funfair and Victor's creepy attic. The inevitable graveyard scene involves an inspired nod to a certain kitty product and it is this balance of light humour with black comedy that makes Frankenweenie such a joy to watch.

A number of  actors bring life to characters who are clearly inspired by classic horror films, including Burton regulars such as Winona Ryder and Martin Landau, whose exceptional voice work leaves little to be desired as Victor's kooky neighbour Elsa Van Helsing and his booming teacher Mr Rzykruski respectively. Danny Elfman contributes a suitably haunting score which adds a grandiose scale to the proceedings whilst never overpowering the dialogue.

Whilst Frankenweenie cannot compete with Burton's earlier classics it is still a brilliantly realised film that lovingly references films such as Frankenstein and Gojira and it is a delight to see his original story fleshed out into a more substantial screenplay. Horror fans are bound to enjoy the homages and those who miss the references are still likely to be entranced by the captivating visuals and Victor's adorably entertaining dog Sparky. For once the use of 3D enhances the film and Frankenweenie is sure to enchant both children and the big kids amongst us now that Burton has rejuvenated one of his very first creations.

Bottom Line - Perfect for family viewing during the build up to Halloween, Frankenweenie will satisfy Burton's devoted fans and is likely to impress any curious newcomers - 7/10

Positives - Burton is back on top form, and the 3D is perfectly suited to the jaw-dropping animation

Negatives - Frankenweenie may be a bit too scary for very young children - there were a few tears at my screening!
Posted by Filmbantha at 15:45 No comments: 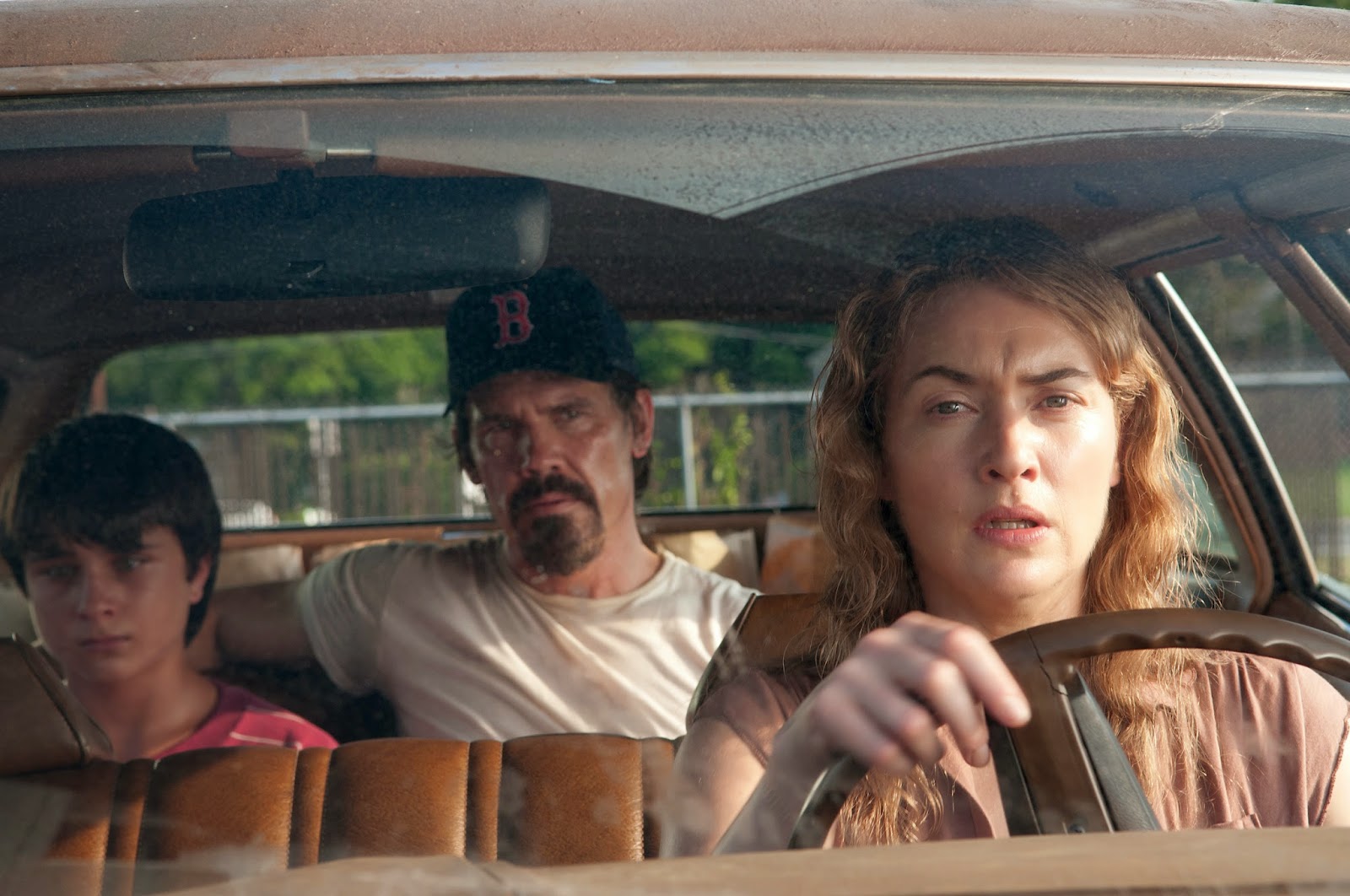 Almost ten years after the release of his impressive debut feature, Thank you for Smoking, Jason Reitman's career is still going from strength to strength, with his latest outing Labor Day continuing his trend for character-driven dramas that place his protagonists in unfamiliar and testing situations. Kate Winslett stars as a single mother, Adele, with all of her love focused on raising her adolescent son Henry, who is due to start high school in the coming days. The two appear to live a peaceful, if at times lonely, existence until this is shattered when an escaped convict, Frank - played by the suitably rugged Josh Brolin, stumbles into their life whilst fleeing from the police, and Adele begins to develop feelings for the seemingly innocuous criminal.

From the very start of the film there is a subtle air of menace which hints at the foreboding danger to come, as well as informing the audience that Labor Day is likely to tread a darker path than Reitman's previous outings. This it does, but not without demonstrating some of the director's lighter quirks, such as references to pop culture and his ability to rekindle vivid memories of a time now past. An E.T. poster in Henry’s bedroom and the family’s choice of film viewing, Close Encounters of the Third Kind, serve not only as a reminder of the era the story is set in but both films referenced also feature a single mother struggling to keep her family together when alien intruders arrive, and this is surely no coincidence. 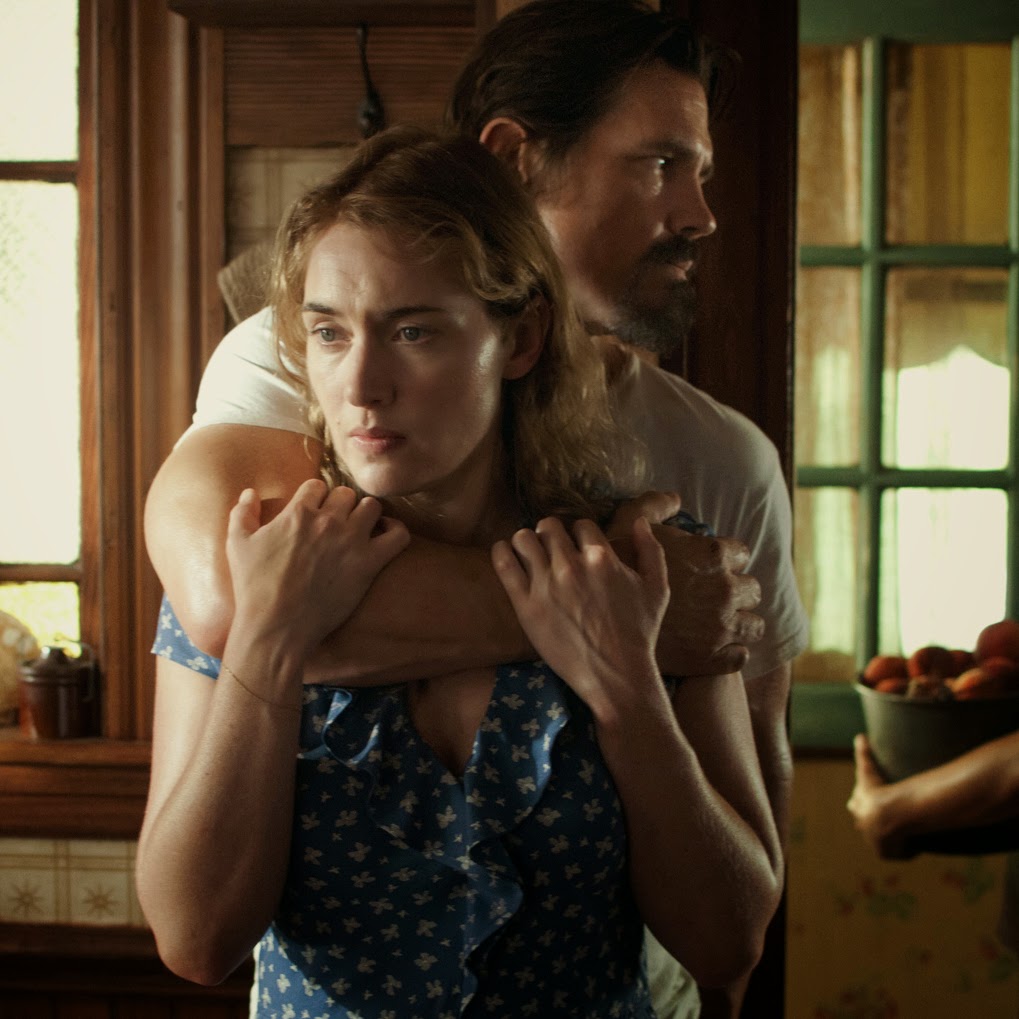 Much like in these classic sci-fi films the intruder in Adele & Henry’s life initially appears dangerous, but Frank soon shows a warm and generous side that kindles a desire in Adele she long thought lost. Unable to escape to pastures new due to his injury, Frank is forced to hide from the police (and other visitors) until he is fully healed but when his relationship with Adele blossoms his inclination to move on lessens. Flashbacks to the reason for Frank’s incarceration slowly reveal his troubled past whilst adding depth to his character, and this heightens our concern for all three parties, raising the question as to whether this newly founded family unit will be able to make it through the difficult times ahead.

Winslett and Brolin are a joy to watch, as too is the young Gatlin Griffith, who confirms that he is an actor to keep an eye on in the future with his pitch perfect turn as Adele’s son Henry. Scenes with Henry and his estranged father towards the end of the film add an emotional note that is unexpected, as do the scenes he shares with Frank, proving that Reitman is an adept screenwriter as well as an accomplished director.

Amongst the current deluge of superhero films and children’s animations, it is refreshing to see an adult-orientated story that is firmly grounded in reality, whilst still providing enough unexpected turns to keep the audience firmly engrossed. Part coming of age drama, and part unlikely love story, Reitman perfectly balances these two elements to create a captivating picture that is sure to move all but the most cynical of viewers.

The Notebook
Young Adult
What’s Eating Gilbert Grape?
The Kings of Summer
Posted by Filmbantha at 18:13 No comments: 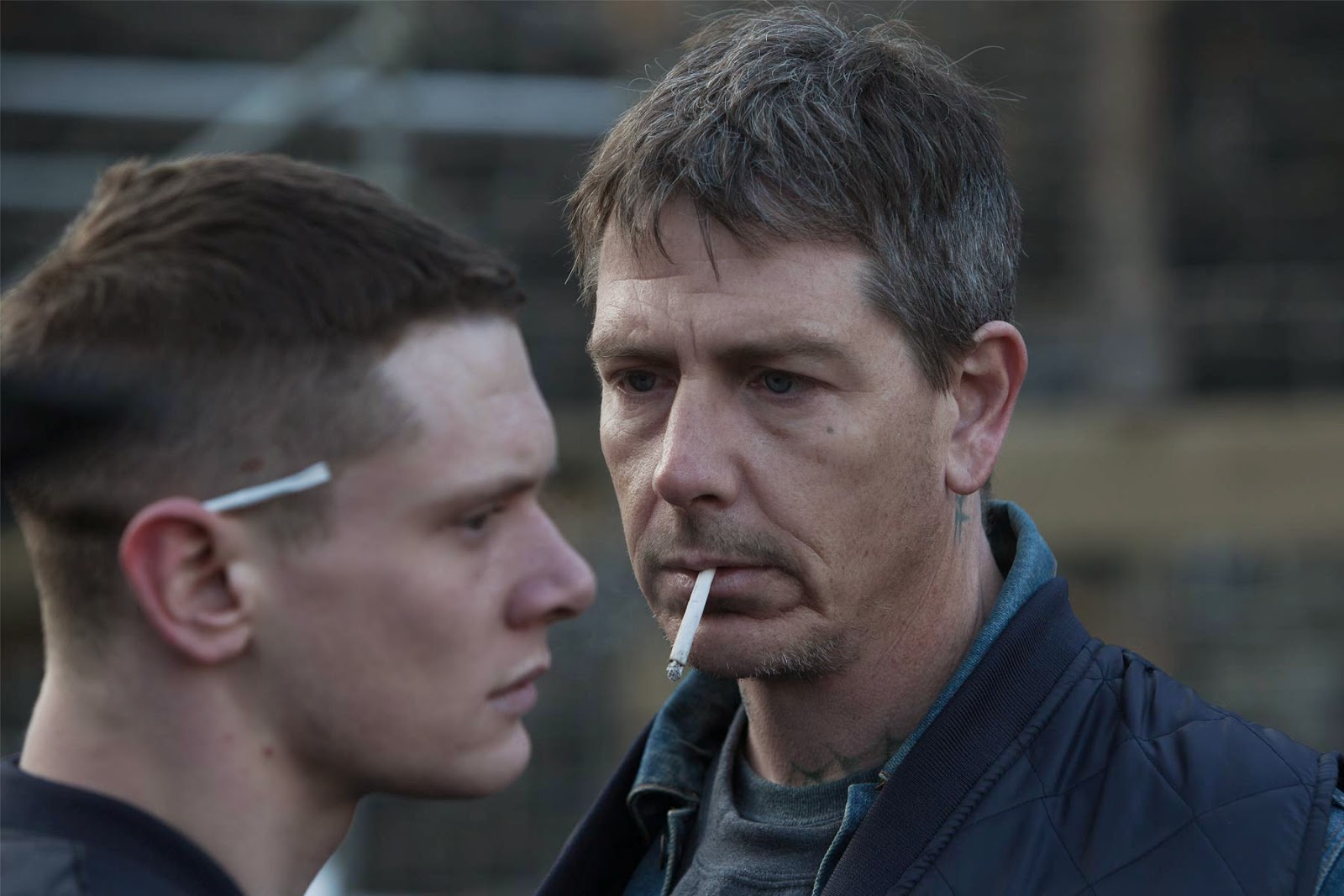 Back in 2008, Steve McQueen offered up an incredible depiction of the true life story of Bobby Sands and his hunger strike in a Northern Irish prison, which was undoubtedly one of the most convincing and depressing British prison films served up in a very long time. Whilst David Mackenzie’s latest feature, Starred Up, is purely fictional, it emphasises the stark brutality of prison in a similar fashion to Hunger, with its long lingering shots and moments of raw, unflinching violence that will inevitably leave viewers stunned at the incredible talent on display from both cast and crew. Whereas Starred Up panders more to a regular audience than the art-house crowd, this is in no way a detriment to the director’s vision, as the gripping storyline avoids most of the usual clichés that dominate the genre to showcase a unique and very brutal take on life inside a British prison for one young inmate.

As a young offender transferred to an adult prison, Eric Love is instantly plunged into a situation far out of his depth, with his violent outbursts drawing unwanted attention from both guards and fellow inmates. Jack O’Connell gives all and bares all in his brave portrayal of Love, including a naked grapple in the shower reminiscent of Viggo Mortensen’s sauna struggle in Eastern Promises, that showcases a dedication to his craft often unseen in actors of such a young age. O’Connell’s career has often seen him typecast as an aggressive and troubled youth, with his role in the TV series Skins, and films such as Eden Lake and Tower Block, showcasing his promise, but it his blistering performance in Starred Up that is likely to leave its mark on the film industry, in what is likely to be viewed as a breakout role for the young actor. 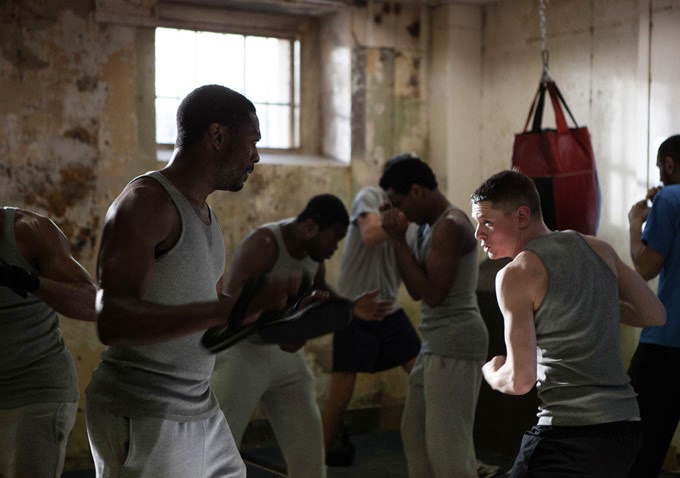 Australian actor Ben Mendelsohn is similarly stunning in his role as a permanent inmate with a social standing only awarded to the most dangerous of criminals, and he shows an unhealthy interest in the alliances that Love begins to form. As the two gravitate towards each other it is only a matter of time before the inevitable power struggle begins, but the ensuing bloodshed takes some unexpected turns, with Love’s dangerously unpredictable persona being the cause of much exasperation for the voluntary care-worker Oliver (Rupert Friend), who takes it upon himself to educate the volatile inmate. The tension often reaches unbearable levels, with a standout scene in the confined spaces of the prison gym showcasing Love’s desperate struggle to reign in his anger, only for it to be released in other places much to the detriment of his situation.

Finding fault with Mackenzie’s film is difficult, and although the behaviour of some prison guards is questionable, this doesn’t detract from the overall experience. Starred up is not going to appeal to everyone as the graphic brutality, nudity, and barrage of vulgar language is likely to offend certain viewers, but those accustomed to films which tread these tropes will definitely appreciate the twisted humour and visually arresting scenes of violence. This is one of the darkest British prison films I have seen in recent years and those who hold classics of the genre, such as Scum, in high regard really need to see this on the big screen, knowing as little as possible for the maximum impact.