Like the start of countless other films, it is the death of a family member that marks the beginning of a new life for Donal (Domhnall Gleeson), the unlucky in love Irish guy who seems to lack certain social skills when approaching the opposite sex, and he is soon thrust into a seedy world that would undoubtedly disappoint his deceased father. After inheriting the grounds of his father's farm, and a few animals to go with it, Donal is soon in talks with local businessmen and it is not long before he is carrying around a sizeable wad of money, and it is with this cash that his connection with a certain call-girl begins to blossom.

From the moment the film begins it is clear that there is an underlying vein of black humour which peppers the script with amusing scenes but these are few and far between, and as the serious nature of the story does not quite have the desired effect of moving the audience, Sensation fails to be more than a less impressive Irish version of Risky Business. Having said that, there are a number of characters whose reliance on Irish charm does make the film worth watching, and the metamorphosis of Donal's character from closet sexual deviant to a full blown pimp makes for an interesting if hackneyed character arc.

Tom Hall's direction shows promise but cannot hide the story's shortcomings, there are few redeeming features about Donal and his actions, and as such it is difficult to empathise with the main character. Likewise, his cocky companion Karl does bring some light entertainment with the choice conversations he has with females but other than this there are few signs of a human side that the audience could relate to. The Sensual call-girl Kim finds it easy to manipulate Donal and whereas we should be feeling disheartened by his treatment, the fact that he fails to listen to his inner doubts means that it is his foolish nature that is to blame for the troubles he encounters later on in the film and the audience are likely to be indifferent to the outcome. The prospects of a great film are all there - with the first few scenes riveting me firmly to my seat - it is just a shame that the story tails off and fails to deliver on what is initially a very intriguing premise. At one point there is even some seemingly unnecessary animal cruelty which takes place off screen but is likely to upset even the most hardy of viewers and once again does no favours for the perpetrator in the eyes of the audience.

If Tom Hall's decision was to create a film full of (mostly) unlikeable characters that meander from one situation to the next then he has succeeded but writing this review a mere three days after my viewing and being unable to clearly remember the ending indicates that Sensation may struggle to find an appreciative audience. My attention was fixed firmly on the film throughout but as I did not, in fact could not, care for the majority of the characters it failed to leave a lasting impact on me and while those interested in Irish films or indeed films about call girls may enjoy Sensation more than me, I imagine it will largely be forgotten about in a few months time.

Sensation is available to buy now on DVD through element pictures
Posted by Filmbantha at 13:14 No comments: 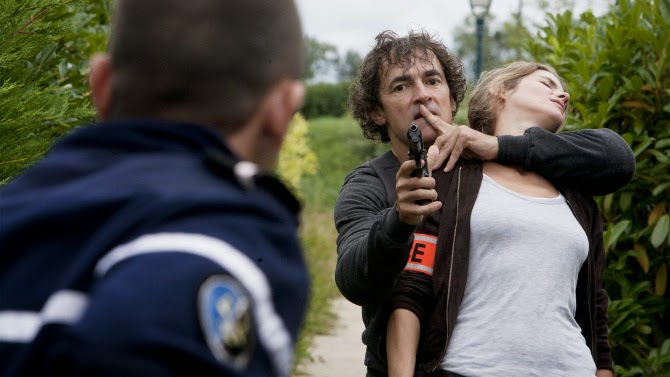 French crime thriller The Prey hits UK shores on DVD this month, here are Tom's thoughts on what turned out to be a surprisingly effective action flick.

When Franck Adrien (Albert Dupontel) is incarcerated in prison for masterminding a bank robbery, he is determined to see out his sentence without any trouble so that he can be reunited with his wife and young daughter, and seek out the money he stowed away before being caught. His cellmate, a suspected child molester, is targeted by a prison gang and when Adrien begrudgingly intervenes it sets in course a vicious downward spiral that could spell the end for him and his family
.
Albert Dupontel is perfectly cast as the wily criminal fighting not only for his life but for justice, and those familiar with French cinema may recognise him from his previous work in Irreversible and A Very Long Engagement. It is great to see Dupontel in a starring role and it is impressive how soon I was routing for his character, with his sympathetic persona and dedication to his family belying a dangerous past.

In recent years the French have given us some exceptional crime thrillers such as Tell no One, A Prophet and Mesrine, with The Prey being the latest release to follow in their footsteps. The action is fast and frenetic, with occasional jaw-dropping set pieces reminiscent of key scenes in each of the above films but with enough fresh ideas to make them stand out as unique and exciting. Avoiding the use of CGI, director Eric Valette makes sure that the stuntwork is grounded in reality whilst still pushing the envelope in terms of what is shown on screen. 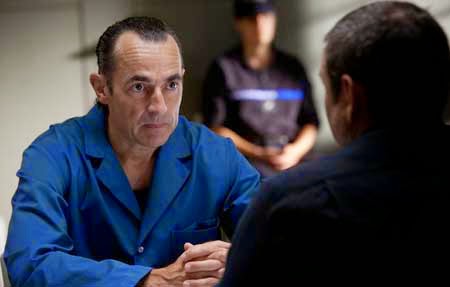 Amongst all of the action there is an intriguing story which does verge upon being far-fetched at times (the number one culprit being serious injuries that are forgotten about very quickly) and although this doesn't detract from the film's entertainment value it does prevent it from reaching the level of brilliance shared by the aforementioned French thrillers which have heavily influenced The Prey. There are enough twists and turns to keep the audience on their toes throughout and it is clear that Eric Valette has come a long way since his flawed but intriguing feature film debut, Malefique, back in 2002 which was also partly set in a prison, but he has not yet honed his craft to perfection.

In a world where Hollywood churns out mindless thrillers on an almost weekly basis, it is inspiring to see a somewhat fresh take on what has become a tired genre. Those looking for their next adrenalin fix need look no further, The Prey may be flawed in paces but its breakneck speed and ferocity certainly make up for any holes in the story, with the solid acting contributing towards what is ultimately one hell of a fun ride. I only hope that with Valette's next directorial outing he can match his eye for outstanding action with a storyline that packs a more coherent punch.

The Prey is out to buy on DVD through Studio Canal

Posted by Filmbantha at 16:41 No comments: 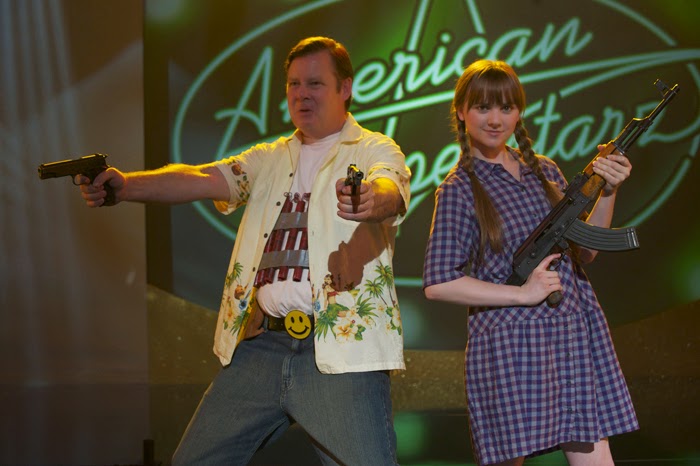 There are a few things in life that frustrate me far more than they really should. The popularity of reality TV shows and the fame hungry individuals who partake in them is one of these and inconsiderate people who talk on their phone during a cinema screening is another pet hate of mine. I would relish the chance to rid the world of these evils once and for all and for that reason God Bless America resonated with me on a level I never would have expected when going into the film.

From director Bobcat Goldthwait, this scathing attack on popular culture is an exceptional follow up to his underrated black comedy World's Greatest Dad which slipped under the radar two years ago and I am determined not to let this happen with his latest release. Joel Murray stars as Frank, a middle aged man not too far removed from Michael Douglas' character in Falling Down, who is understandably disheartened after being diagnosed with a terminal illness and becomes a vigilante killer in an attempt to restore some semblance of a purpose to his mundane existence.

Accompanied by Roxy, a like-minded young teenager played by the excellent Tara Lynne Barr in what I hope will be a breakout role, Frank sets out to right the wrongs he encounters and the duo form a friendship which brings death and violence to those foolish enough to demonstrate a lack of concern for humanity. Numerous comparisons can and have been made to films featuring an unlikely duo heading out on a rampage but God Bless America makes the brave move of introducing realistic characters with believable motives and remains funny throughout despite the often graphic depiction of violence. 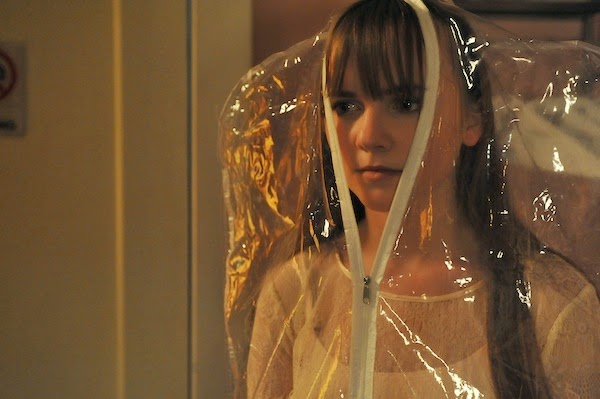 There is a hilarious sequence in which Frank's migraine worsens as he watches a series of brilliantly executed over the top adverts which are not a world apart from Paul Verhoeven's satirical commercials in Robocop and Starship Troopers. It is this satirical edge that makes Goldthwait's film stand apart amongst its peers and provides the audience with food for thought as well as slick entertainment. The classic rock soundtrack featuring the likes of Alice Cooper and the Kinks is the perfect accompaniment to the comical violence alongside the inspired choice of Bjork's 'Oh so quiet' in one of the film's standout scenes.

God Bless America is a darkly comical film that pulls no punches in its attack on stupidity and mindless entertainment. Its ironic title clearly emphasises the director's views of his own country and whilst I have read criticisms of the film's overly political slant this does not detract from the entertainment value of what is a finely crafted comedy. Forget your superheroes; Clark Kent and Bruce Wayne may need their alter egos but Frank is just a middle aged man fighting for what he believes in, without a costume or any special powers, only with a desire for justice. God Bless America indeed.