Ever since the success of 28 Days Later back in 2003, the post-apocalyptic genre of films has been a crowded market with its fair share of successes and failures. Notable releases such as The Road and Zombieland have been accompanied by such misfires as Doomsday and I Am Legend that, whilst entertaining, ultimately failed to hit their mark. Stakeland is a brave and accomplished entry in Jim Mickle's career, and although there are only a handful of original ideas throughout the film, the ideas taken from other movies are handled with enough skill that they serve only to enhance the overall viewing experience. It must be said, some of the director's own ideas are fantastic and show a great potential for the future - a future that the ragged band of survivors we follow throughout Stakeland may not be able to enjoy.
After our protagonist is saved from a disastrous situation which leaves him as the sole survivor of his family, he is taken under the wing of his rescuer; the elusive ‘Mister’, whose similarities to Whistler from Blade appear to be more than pure coincidence. Together,they embark on a road trip that tests them to their very limits as they encounter a whole host of dangers and struggle to survive whilst roaming throughout North America, picking up a number of travelling companions on the way.


In a storyline not too dissimilar to The Mist, some surviving factions of humans believe that God has sent the vampires to punish humanity and it is these that pose almost as much danger to our band of travellers as the dangerous breeds of vampire that stalk them. These cults are a welcome addition to the film, enhancing the aspect of danger and providing the basis for some of the film's more memorable moments in a standout scene where a supposedly safe town is assaulted from the air.

The initially nameless main character - played brilliantly by Connor Paolo (the spitting image of a young Colin Farrel) - has his life turned upside down at the start of the movie, however, we do not get to see how the whole world initially turned upside down, and the cause of the vampire's origins is rarely touched upon. His story is told through countless monologues that overlay the fantastic imagery of sparse vistas and urban decay, creating a sense of scale that is far beyond what we see on the screen. Whilst the other characters we meet do not have enough time to develop fully, they all play an essential part in the story, and although some scenes could have been far more powerful if the audience were affected by their plight, the suspense was enough to keep me on my edge of the seat throughout.


There are few scares to be found in Stakeland but the overall sense of foreboding doom and the generous helpings of violence and gore should please the majority of horror fans. Anyone with even a passing interest in post-apocalyptic films will definitely take a lot from Stakeland and although it is not quite a genre classic, it will certainly become a cult favourite in a few years time.
If you like this, you will love these:
The Road
Zombieland
28 Days Later
Near Dark
Posted by Filmbantha at 20:00 No comments:

Five of the best - Circuses in Film

After watching The Last Circus trailer far too many times, and getting far too excited in the process, I couldn't help but cast my mind back to other films set in and around the circus. Here is a list of some of the best and hopefully some recommendations that you haven't encountered: 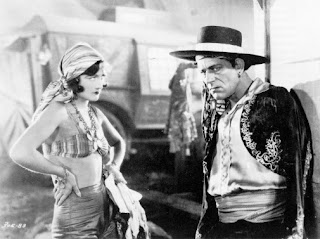 The Unknown - Most horror fans are familiar with Tod Browning's highly influential tale of deformed circus acts that was banned for over 30 years in the UK, the cult classic known as freaks. However, five years before Freaks, he directed Lon Chaney in an equally disturbing story of an armless knife thrower and his unrequited desire for a glamorous assistant that is infatuated with the circus' strong man. Forget Water for Elephants, the macabre love triangle in The Unknown portrays the dark and disturbing side of the circus like no other, with a gripping storyline and haunting finale that will remain with you for a long time to come. With a running time of just 49 mins, this is well worth tracking down if you are lucky enough get hold of a copy. 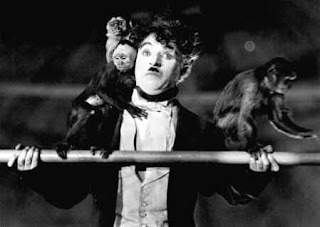 The Circus - Charlie Chaplin is one of my favourite directors, and it is a testament to his skill as both a director and actor that his films have stood the test of time. The Circus follows one of silent cinemas most iconic characters - the tramp - as he finds work and lusts after the owner's acrobatic daughter whilst encountering a number of perilous situations that are guaranteed to induce laughter. The themes of love and jealousy are as prevalent in The Circus as in The Unknown, and it is perhaps the grandeur of the setting and the variety of the people involved that has made life in the circus such a perfect backdrop for tales of romance and betrayal. Unlike The Unknown, this is suitable for all ages, and will easily entertain those who decide to seek out this classic comedy.

La Strada - One of Federico Fellini's more accessible films, La Strada follows the adventures of a girl who is sold to a travelling strongman by her mother, and endures a number of hardships along the way. Unlike his art house films, whose meandering plots and obscure symbolism can confound the casual viewer, La Strada is a joy to watch, and despite the often dark undertones that propel the plot forward, there are moments of touching humour throughout as our protagonist Gelsomina meets and falls for a clown known simply as The Fool. This film won an Oscar for Best Foreign Language Film in 1957 and is an essential watch for anyone with a passing interest in world cinema.

Wings Of Desire - Another film for World Cinema fans, this German classic is a beautifully shot film that follows an angel whose uncontrollable desire for a circus acrobat leaves him longing to become human. Shot in stark monochrome for the majority of the story, the addition of colour to key scenes heightens their impact and enhances the aura of mystery that surrounds the angels. This was remade as City of Angels in 1998 but I have stuck with the original and doubt that I will ever find the time or even want to watch the remake. Correct me if I'm wrong but I imagine that Wings of Desire is far superior to the English language version, and those who have not seen the original should definitely give it a shot. 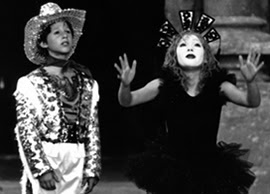 Santa Sangre - I'll finish how I started with another classic horror film, and one that I imagine is closest in both style and theme to The Last Circus. Jodorowsky's first and only foray into the world of horror is just as bizarre and experimental as his more famous works El Topo and The Holy Mountain, whilst being far more macabre and gruesome, with the circus providing the perfect backdrop for his twisted imagination that straddles the fine line between genius and mad man. We follow the life of a young circus performer and his family through a series of flashbacks before he escapes from a mental institution and seeks vengeance for his brutal upbringing. I imagine that Santa Sangre was one of the key influences behind The Last Circus and we can only hope that it is as bold and daring as this gruesome tale of revenge.
Posted by Filmbantha at 20:59 No comments:

Ever since my first encounter with David Cronenberg's unique brand of body horror upon my chance viewing of The Fly in my early teens I have been enamoured with his output. Even though Cronenberg has strayed away from the style of films that created his initial success, his bold move into different genres has proven successful with A History of Violence and Eastern Promises. His latest effort, A Dangerous Method, marks his third collaboration with Viggo Mortensen alongside a stellar cast including Michael Fassbender, Vincent Cassel and Kiera Knightley. Following Freud and Jung during the development of psychoanalysis, the film appears to be a gripping drama that may well contain some powerhouse performances from the lead actors. Fingers crossed that this turns out to be as good as it looks.

Posted by Filmbantha at 19:51 No comments:

This looks like one of the most insane films ever made. Be warned this is the red band trailer so there is lots and lots of violence and gore - just the way I like it.

Posted by Filmbantha at 18:29 No comments: