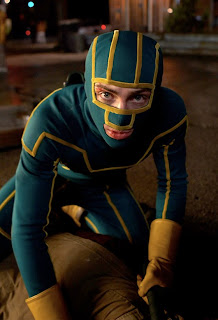 It has been a long time since I have left a screening with endorphins pumping through my body and the strong urge to learn a martial art but Kick-Ass did exactly that; I felt like I could take on the world! An explosive ride that covers insane action sequences, intelligent superhero parodies and intense dramatic turns, Kick-Ass is a welcome addition to the realm of the comic-book movie.

I was initially sceptical about the prospect of watching another superhero spoof movie, most recent attempts at the genre have been abysmal, but Kick-Ass completely transcends its predecessors through the use of intelligent pastiche which drives the story forward as well as providing laughs. The brilliantly choreographed action scenes would not feel out of place in a Spiderman film, or even a Tarantino script, in fact it feels like Spiderman and Kill Bill were put into a blender and Kick-Ass was the end result.

The story focuses on Dave Lizewski, your average teenage nerd, whose obsession with comic books inspires him to create his very own superhero, Kick-Ass, despite his discernible lack of superpowers. Dave’s attempts to become a vigilante crime fighter initially end in disaster but in the process of rescuing a cat his luck changes, propelling him into the public limelight and  establishing him as a figure to be reckoned with.

It is not long before other vigilantes surface, some desperate for the fame and attention, others out for revenge, and when Kick-Ass becomes embroiled in a crime lords devious plans, we are treated to a number of intense melees that gradually escalate in size and repercussions for those involved. There has been some controversy over the graphic violence depicted in these scenes, especially as the trailer is intended to appeal to a fairly young audience, and that comes as no surprise when a pre-teen girl decapitates villains on screen and uses the c*** word. Controversy aside, I cannot deny that this was very entertaining. 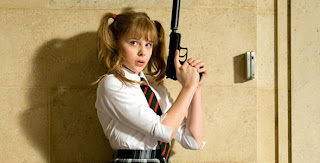 Chloe Moretz easily steals the show as Hit Girl - the incredibly volatile young superhero with a penchant for explicit language, which will surely propel her into the realms of stardom. Nicolas Cage is surprisingly effective as her doting father, and Christopher Mintz-Plasse is ever watchable as Red Mist. However it is Aaron Johnson who shows the most promise as Kick-Ass, with his convincing turn from a bumbling student to a brave and reckless crime fighter marking him as a talent to watch out for.

An essential part of the film is its eclectic soundtrack, with choice tracks taken from excellent films such as 28 Days Later and For a few dollars more. Usually I would be concerned at such a prospect but the Kick-Ass soundtrack adapts the tracks brilliantly, making them feel like its own, alongside great songs from The Prodigy and Sparks to name a few. The choice of music fits perfectly with the high-octane action sequences and even adds emotional depth to key scenes - not bad for a superhero comedy movie!

Kick-Ass is that rarest of films, a successful hybrid of two genres that delivers an almost perfect cinematic experience. My only criticism would be that some sequences near the end were slightly far-fetched but in a film where suspension of belief is required, maybe I'm being a little harsh. This is an essential film for all cinemagoers, catch it on the big screen and I guarantee you will be completely immersed in the explosive yet entertaining world of Kick-Ass

Special
Spiderman
The Dark Knight
Superbad
Posted by Filmbantha at 18:01 No comments: 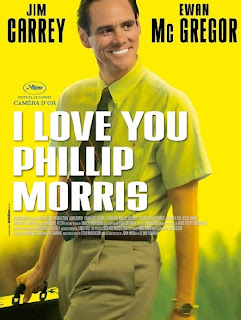 This is not a film I would go to see by choice but fortunately See film first (check out the link in useful links) came up roses again with free tickets to a preview screening. You can tell that I had low expectations of I love you Phillip Morris, and this was mainly due to the fact that Jim Carrey’s rubber face and daft noises have never been enough to get me excited about a film. Some of his previous roles in captivating dramas such as The Truman Show and Eternal Sunshine have been a key to the overall success of the movie but his appearances in low brow comedies tend to leave me disappointed.

Thankfully, I Love You Phillip Morris falls in the middle of Carrey’s previous performances, a healthy dose of comedy which is aided by an engaging storyline as the captivating conman struggles to escape the law and eventually meets the love of his life in prison. The relationship between Ewan Mcregor and Jim Carrey is completely convincing, despite the absurdities of the situation, which is actually based on a true story.

It is hard to describe the film without drawing on comparisons to another well known film in which Leonardo Dicaprio runs from the law; this is essentially Catch me if you can with a gay man. Although the film fails to live up to the success of its predecessor, it is an entertaining ride and a welcome escape from the teen comedies which tend to dominate the box office.

I have no doubt that audiences will flock to this film expecting another zany Carrey comedy but the humour does tend to take a back seat in some of the more poignant moments in the film. Fortunately the life story of Phillip Morris is a compelling one, although the dramatic turn near the end of the movie is not as effective as it could have been.

If you’re a fan of Jim Carrey, you are sure to enjoy this, I was pleasantly surprised by the film but this could be due to the low expectations I had. Definitely worth a look if you get a chance but I doubt I would go out of my way to watch it again.

Catch me If You Can
Milk
Priscilla, Queen Of The Desert
Man On The Moon

Posted by Filmbantha at 13:12 No comments:

New Release - The Blind Side

I’ll be honest, I’m not a fan of sports movies, however, the past couple of years has seen great films such as Invictus and The Wrestler, both showing how sports can be an integral part of a captivating story, and reigniting my passion for older classics such as Rocky and The Hustler. Unfortunately, The Blind Side fails to compete with any of these films, despite being based on true events and receiving two (undeserved) Oscar nominations. Following the journey of a neglected teenager who learns the true values of friendship and family, whilst playing some American Football on the way, this is a film riddled with clichés and fairly average performances - I cannot comprehend how Sandra Bullock won the Best Actress nomination - that somehow manages to entertain despite these problems.

We have all seen film like these before, and The Blind Side brings nothing new to the table. Michael Oher, the young boy in question, is a homeless teenager with a troubled past who is kindly taken in by the Touhy family, where he soon becomes one of the family. Although he shows no talent for football, his size means that Michael is soon singled out to be the team’s blocker, and eventually learns that his team are his family and he must care for them just like he cares for the Touhy family.

I can see many people enjoying this film; it’s an easy watch, suitable for all ages and delivers a message, but to me, this is its downfall. My favourite movies tend to be edgy, controversial films that offer something original whereas the only positive way I can describe The Blind Side is to say that it was pleasant.

I wasn’t bored, but I certainly wasn’t entertained either. No doubt the huge publicity surrounding the film since the Oscar winners were announced will guarantee its success but I still can’t imagine that it will inspire British children to grab an American football and hit the fields when its released on March 26th.

Invictus
Dead Poet’s Society
The Pursuit Of Happyness
Stand And Deliver
Posted by Filmbantha at 17:39 1 comment:

I’ve eagerly anticipated Tim Burton’s latest releases from before I can remember, and with Alice in Wonderland marking his first foray into 3-D, this was no exception. Arriving early at the cinema, we were treated to a live satellite link-up from the world premiere hosted at London’s Leicester square. Watching Prince Charles shake hands with almost everyone involved in the film was not my idea of fun but it certainly made an interesting change to the cinema experience. After the formalities he was shown into the cinema and the film could eventually start for him at the world premiere, and me in the comfort of Cineworld Didsbury.

Unlike previous adaptations of Alice, Burton takes the viewer on a new journey, only loosely following aspects of Carrol’s classic stories ‘Alice in Wonderland’ and ‘Through the looking glass’ to create an entirely new experience. Although this may disappoint fans of the stories, there are still a lot of familiar characters to be seen as Alice is portrayed as a young woman returning to the world she first envisaged as a child - almost like an unofficial sequel to Carrol’s work.

Having only seen two films in 3-D prior to Alice in Wonderland; Coraline and Avatar, I was still unsure whether 3-D was more than just a gimmick, however, it certainly enhanced the visual aspect of the film, bringing life to Burton’s dark and mysterious world.

There is some fantastic casting within the film, especially Matt Lucas as Tweedledee and Tweedledum, and although the computer generated effects used to render the characters are impressive, I was left longing for the extravagant costumes that Burton fans are used to seeing in his earlier films - Beetlejuice and Edward Scissorhands come to mind. Despite this, we still see a glimpse of Burton’s once awe-inspiring creations with a number of weird creatures that inhabit Wonderland, as well as some suitably creepy decapitated heads that serve as stepping stones in a castle moat.

Putting aside a few moments that young children may find scary, this is definitely a family movie, with elements of humour clearly aimed at the younger audiences. One such moment comes near the end of the film when Johnny Depp displays his ‘funderwhacking’ abilities, and whilst that phrase may excite people who have yet to see the film, for me it merely conjures up a horrendous image that I would rather forget!

Most people will have high expectations of the film due to the calibre of actors and actresses involved but I have seen all of them in much better performances, apart from Barbara Windsor - it’s nice to not see her face for once, as Burton does not devote enough screen time to any one of the multitude of characters that inhabit Wonderland.

Although Alice is not a landmark film by any means, I cannot deny that I was soon absorbed in the story, despite its numerous flaws. If you do decide to head to the cinema, make sure you see it in 3-D, as this definitely played a big part in my enjoyment of the film. I doubt I would watch Alice in Wonderland again but would certainly recommend it for families and young children.

Coraline
Labyrinth
Laputa: Castle In The Sky
The Fall
Posted by Filmbantha at 17:17 No comments: