As you read the synopsis of The Shrine you could be forgiven for thinking that you have seen this film countless of times before; the usual horror cliche of a group of young journalists investigating a spate of mysterious disappearances in a Strange European location no longer sounds appealing to me in a world where Hostel part three exists. Far from being your typical gruesome and pointless torture porn horror, The Shrine throws up enough unexpected turns to keep your eyes glued to the screen and whilst none of the ideas are particularly new or inspiring, the way they are included in the story is original enough to make this an enjoyable watch for horror fans. 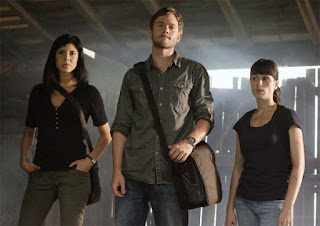 A couple on the rocks; Carmen (Cindy Sampson) and Marcus (Aaron Ashmore), are joined by Carmen's journalist sister, Sara (Meghan Heffern), to see if they can get the scoop of a lifetime to boost her ailing career, and set off to Poland unaware of the dangers that await them. Hostile villagers, bizarre smoke above the forest and terrifying statues are just the start of the unnerving situations the group encounter and, up until the final part of the film, the audience are left in the dark as to the villager's motives. All three of the characters make a number of questionable decisions, as is usually the case with horror films, but thanks to the story's unique approach to the subject matter of bizarre cults I found myself able to overlook these minor flaws.

Some of the acting does lack conviction but for the most part the performances are solid enough to be believable. Trevor Matthews stood out as an actor to watch for the future, his role as the steadfast villager who warns the trio to leave the area adds an air of menace to the proceedings as he is constantly bristling with aggression and at times he appears genuinely intimidating. 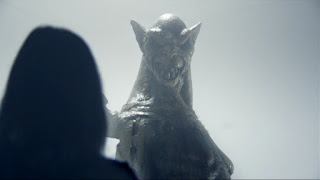 I'll admit that there were a few startling moments that did cause the occasional shudder, and people who are easily scared would do well to watch The Shrine with company, or at least a cushion or two to hide behind. If however you are like me and thrive on a good scary film, make sure that your surround sound is turned up loud - the creepy atmospherics add to the build up of tension and enhance the films eerie feeling that will leave you unsettled and on edge.

There have been a number of comparisons made to all kinds of horror films ranging from The Wicker Man to The Evil Dead but The Shrine does have enough innovation to stand on its own two feet. Jon Knautz who wrote and directed The Shrine has borrowed ideas from the classics and given them a fresh spin to ensure that this is something that horror fans will not have encountered before. In a world full of endless remakes and rehashed ideas it is great to see an innovative horror film and although it is not quite the classic it could have been, The Shrine is certain to obtain a cult following.

Posted by Filmbantha at 13:28 No comments:

This Hammer production from 1963 has lurked in the depths of obscurity for almost fifty years but is finally being released on DVD which will be news to the ears of any Oliver Reed fans out there. Unlike the typical horror films churned out by Hammer in the 60's, The Scarlet Blade is a historical adventure that takes place during the tumultuous civil war that reshaped England in the mid 1600's, with the Roundheads and the Cavaliers taking up opposing sides due to their loyalties to parliament and royalty respectively. 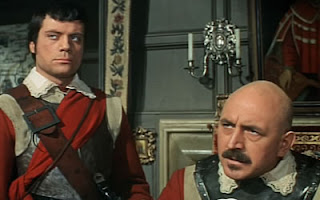 Daunted by the task of watching a forgotten Hammer film that had only received 87 votes on IMDB, my fears were soon laid to rest when the opening sequence exploded across the screen with a fairly impressive battle in full flight, cannons launching across fields, soldiers on horses charging at infantrymen, and what appears to be the same extras in every shot. Braveheart this isn't, but The Scarlet Blade has plenty of entertaining swordplay to keep fans of bloody history films interested for the entire 83 minutes, and enough semblance of a plot to capture the attention of all but the easily distracted.

The story follows the exploits of a group of Roundheads headed by Colonel Judd who is played by Lionel Jeffries and his second in command Captain Sylvester, portrayed by none other than the man himself, Oliver Reed, who capture King Charles I near the start of the film. It is not long before a number of cavaliers, who would not be out of place in Robin Hood's band of merry men, attempt to sabotage the well laid plans of the roundheads in order to rescue the King. Heading up this rebellion is the eponymous Scarlet Blade, who you would be forgiven for thinking should have a certain level of charisma, but Jack Hedley's uninspiring acting fails to compete with the film's more heavyweight actors. 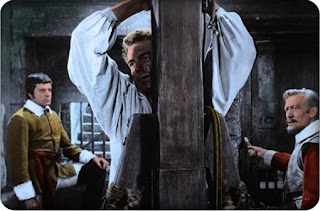 A love triangle soon begins between Colonel Judd's daughter, Claire, the Scarlet Blade and Captain Sylvester and it is not long before loyalties are tested and sides are switched, with informers and infiltrators causing all kinds of havoc for both sides. I was surprisingly intrigued by the story, and despite a few camp and whimsical moments that could easily have been excerpts from a Monty Python sketch, The Scarlet Blade was an enjoyable historical romp that did not overstay its welcome.

Posted by Filmbantha at 13:31 No comments:

When horror and comedy are mixed well it can lead to some fantastic results; splatter-fests such as Bad Taste and The Return of the Living Dead prove they are a combination that is meant to be together, and some of the best horrors are tinged with black comedy. I am always wary when approaching horror comedies as it is not hard for them to miss the mark but, when a handful of originality can lead to a cult classic, I was intrigued to see if DeadHeads would be up there with Bad Taste or end up leaving one in my mouth. 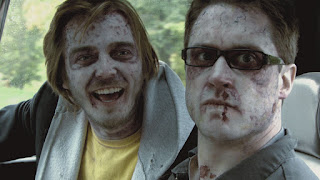 The simple premise of siding with the villains throughout a horror film is an under-used storytelling technique that has recently gained popularity thanks to the success of hillbilly horror spoof Tucker and Dale Vs Evil. DeadHeads treads a fairly similar path, choosing to follow the actions of a recently turned zombie, Mike Kellerman, who is struggling to comprehend his new existence.

With a burning desire to visit the love of his life, Mike sets off on a voyage of discovery stopping only to pick up other zombies who are eager to join him for the ride, and are only too happy to help when it comes to easing him into his new life as a shuffling corpse. Pursued by people hunting the living dead for different reasons, Mike and his pals soon bite off more flesh than they can chew and end up in a number of sticky, and very gory situations.

It is not long before the homages come thick and fast with nods to countless other zombie films being a staple of the film's script, thankfully this is not to DeadHeads detriment as the send-ups are all in good faith as well as fitting nicely alongside the story. Unfortunately, when it comes to humour, DeadHeads is disappointingly lacking, and some of the weaker sub-plots fail to flesh out what at times seems to be an overly long film. 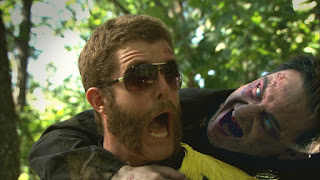 There are a number of redeeming features though; Deadheads contains the best intestine scene since Machete came along, and although that's not saying much, the gruesome effects are impressive for the low budget, with some very convincing dismemberments and bucketfuls of blood thrown in for good measure. Whilst the acting is not pitch-perfect, the cast all deliver enthusiastic performances and it is worth sticking around until the end to catch the fantastic improvisations that run alongside the credits.

It is clear that DeadHeads is a labour of love and as such it feels wrong to criticise the film too harshly but there are times when the humour feels forced and falls flat. This is by no means a bad film, and will certainly be enjoyed by zombie aficionados, but I doubt that it will find a wider audience and is perfectly suited to its direct to dvd release.