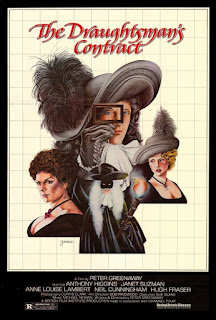 Cinema draws heavily from the art world for inspiration and film directors often reference classic paintings by recreating memorable artworks within the scenes of their films. One British director whose filmography is explicitly linked with the art world is Peter Greenaway, whose keen eye for detail and optical theory brings a distinct visual style to his intricate methods of storytelling. The Draughtsman's Contract is his first conventional feature length film, a stunning period drama with an unusual mystery that revolves around an artist who is commissioned to draw twelve pictures of a stately home. Those with an affinity for the art world will be enamoured by Greenaway's precise framing and rich composition, as the scenes within his picturesque film embody the qualities of an alluring painting. This is exemplified by his protagonist, Mr Neville - the Draughtsman, throughout the story as he points out the various elements employed to create a successful drawing as he regales those who require his services with the details of his techniques. 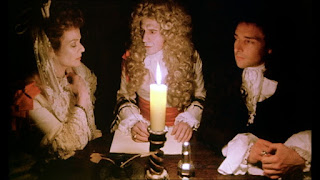 When the twelve paintings are complete they are to be presented to the head of the house, Mr Herbert, as a gift. Mr Herbert is currently away from the estate and has entrusted its care to his wife, Virginia, who is instrumental in establishing the Draughtsman's Contract as a surprise for her husband. As well as being paid (rather handsomely) for his work, Mr Neville makes arrangements to gain intimate knowledge of Mrs Herbert. His frivolous sexual desire also extends to taking an interest in her daughter, Mrs Talmann, much to the frustration of Mr Talmann, who remains at the estate throughout the commission, and is suitably perturbed by the Draughtsman's intrusion.

Mr Neville is a charismatic yet conniving character, and Anthony Higgins embodies his mischievous persona in a manner that has you firmly invested in his ventures throughout. His relationships with the female members of the household are sordid affairs accompanied by frank discussions that are very revealing, and thoroughly entertaining. Both Janet Suzman as Mrs Herbert and Anne-Louise Lambert as her enchanting daughter are superb in their portrayal of the scheming ladies whose charms Mr Neville succumbs to. The uproar that arises from Mr Talmann (Hugh Fraser) when he discovers the Draughtsman has designs on his wife is a standout scene from Fraser, although it is the scenes he shares with Higgins as the two bicker during dinner that showcase the spectacular dexterity of both actors. 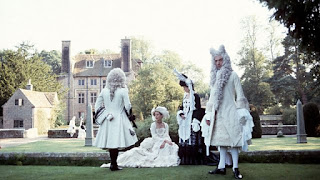 The witty diatribes between these two gentlemen are a source of much amusement; their indirect
methods of insulting each other are brimming with fanciful archaic language that is a delight to hear spoken in such a refined manner, with great heed being paid to elocution and enunciation. This elaborate dialogue fits remarkably well with the projected personas of the upper class nobility who strut around the estate with an air of entitlement and superiority as they flaunt their extravagant wigs and lavish outfits. The costume design is exceptional, and the setting - a sumptuous country manor in the heart of Kent - also helps to transport the viewer back to the turn of the 18th Century as the building's facade and gardens are indicative of the architecture and landscape of that time, whilst also evoking the sense of a rich family heritage.

Greenaway's long time collaborator, Michael Nyman, has created a vibrant soundtrack that is a stunning work of art in itself; the aural equivalent to Greenaway's visual feast that elevates the Draughtsman's Contract with its fresh take on the baroque music of Henry Purcell. These pompous melodies hint at the inherent dangers in toying with the rich and powerful, at a time when falling out of favour could spell ruin for those who extend their reach too far. The superb soundtrack has since been repurposed for a number of other films and television shows, most notably the excellent documentary Man on Wire, as the dramatic power it delivers is capable of enhancing the impact of any scenes it accompanies. 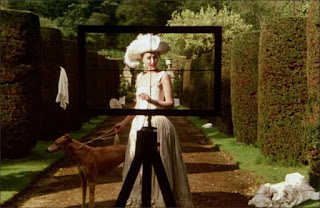 The inventive intricacies of Greenaway's mystery are presented in a manner which allows the observant to reach a satisfactory conclusion even though there are some incredibly bizarre and playful red herrings that can easily distract your gaze. This method of storytelling is an approach that has continued throughout the director's illustrious career although it is arguably at his most accessible here, before his fascination with experimenting began to transform into an indulgence that became alienating in some of his radical later works. Visual cues and conversations that allude to off-screen events encourage you to reassess your understanding of the situation, and the scheming nature of Greenaway's fascinating characters will cause your trail of thought to meander down the wrong path many times during this enthralling mystery. 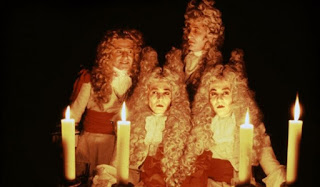 The Draughtsman's Contract inhabits a surreal space all of its own. On the surface it appears to be a quintessential British period drama but Greenaway's playfulness marks it as a fascinating insight into the seedy lives of nobility and the dangerous games they play. Yorgos Lanthimos cited it as a huge influence on the style of his Oscar nominated film The Favourite, and the similarities show how enamoured he must be with Greenaway's classic, which is high praise indeed. It is an extraordinary and inspirational picture, visually arresting and featuring a mesmerising storyline that begs you to seek out more of his delightfully zany oeuvre. If any film's appearance can enhance your appreciation for the importance of the art world in shaping the cinema that we enjoy today, it is undoubtedly the brilliant visual style of The Draughtsman's Contract.

If you take the time to watch The Draughtsman's Contract then it would be awesome if you could also take the time to let me know what you thought of it, either by commenting below or tweeting me @filmbantha. Thanks, and enjoy!


For previous instalments in the series click here
Posted by Filmbantha at 17:30