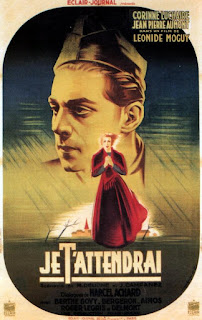 
With the outbreak of World War One, many families and lovers were separated when men deemed fit for active duty were drafted into the French army to protect the country from the approaching German army. This situation tested the loyalties of soldiers torn between the love for their country and their devotion towards those closest to them, with some (brave or foolish?) men even risking the death penalty by fleeing from their duties in pursuit of being reunited with their loved ones. Je T'attendrai or The Deserter is a stirring French drama that explores this very notion when a soldier seizes the chance to visit the woman he intends to marry, for one last time before heading towards the front, after a faulty train track delays the transportation of his unit. 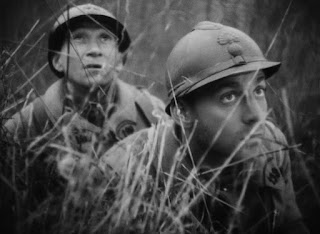 This poignant tale by Director Léonide Moguy was released in 1939, prior to the start of World War Two, and was subsequently pulled from circulation when its content was viewed as defamatory towards the war efforts. As a result, this beautifully shot romance was consigned to obscurity, where it sadly remained until none other than Quentin Tarantino pushed for its restoration when discovering Moguy's filmography during his research for Inglourious Basterds. Moguy utilises the war as a thrilling backdrop to his emotionally charged romance and provides a rare, hopeful outlook to his storyline that unfolds largely in real time - an inventive approach considering the era in which the film was made. His considered framing creates an enchanting and evocative view of the distressing situations encountered by the film's key players. The striking imagery is one of Je T'attendrai's most accomplished elements and the memorable shots enhance an already enthralling storyline.

Private Paul Marchand (Jean-Pierre Aumont) is the lovelorn soldier who convinces his commanding officer to allow him to visit Marie (Corinne Luchaire), the alluring lady from his hometown who has captured his heart. Aumont is perfectly cast in this role, embodying the characteristics of an innocent young soldier who is fearful that he may never return from the war. Marchand seizes the opportunity to allay his concerns about a future together with Marie only to find that the distance between the two lovers - and the interference of Marchand's proud parents - has taken its toll on their relationship. Luchaire's dazzling performance as Marie encapsulates the pain and grief of a lonely woman, uncertain if the future holds any prospects for her and the man she was once smitten with. Their natural chemistry lights up the screen, delivering an emotional hook that encourages the audience to desire a rekindling of their union.

We become fearful not only for the fate of this relationship but for Marchand's life as he risks being court martialled if he fails to make it back to his squadron before the train departs. These anxieties weigh heavy on our protagonist as he wrestles with his feelings and faces almost impossible decisions in the pursuit of his own happiness. A rousing score heightens the tension and invokes a sense of urgency as Marchand's limited time with Marie comes close to expiring. Heated scenes in the storeroom of a bar which Marie now works in leave us with bated breath as the bar owner's manipulative hold over Marie is challenged by Marchand, causing a devastating blow to the couple's chance of working through their differences. 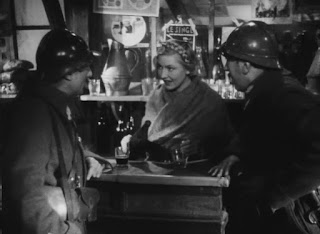 Reluctant reconciliations result in a flurry of activity in the film's intense finale as the main characters scramble to retain their hold on that which is dearest to them. Like the ever-ticking clock in High Noon, we are conscious of the short window of opportunity presented to Marchand and this ploy brings a generous dose of suspense to an otherwise relatively simplistic storyline. There is beauty in Je T'attendrai's simplicity though; it's an elegantly told and engaging story with universal appeal. The care and attention paid to the cinematography and the heartfelt acting elevate the screenplay to the realm of an overlooked French classic that deserves to be bestowed with far more acclaim and appreciation than it currently garners. 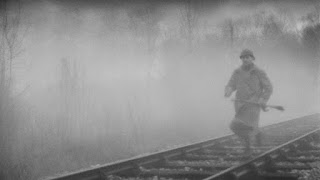 Those who take pleasure in perusing the forgotten annals of a country renowned for its incredible contribution to the cinematic landscape will undoubtedly rejoice in experiencing such an impassioned labour of love from Léonide Moguy. Its snapshot of an era in history prior to the devastation of World War Two offers a fascinating insight into the cruel follies of World War One and the ensuing regret that consumed enlisted soldiers as they headed out to the front, unaware if they will ever return. The breath-taking artistry of the images presented by Moguy serve to create a highly memorable encounter that is likely to linger on your thoughts long after the heart-palpitating climax has passed. This is one deserter that you will be reluctant to let out of your sight for too long as its striking imagery draws you back in to revisit its bewitching grandeur time and time again.

If you take the time to watch Je T'attendrai then it would be awesome if you could also take the time to let me know what you thought of it, either by commenting below or tweeting me @filmbantha. Thanks, and enjoy!

For previous instalments in the series click here
Posted by Filmbantha at 08:18 No comments: