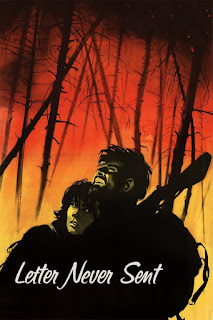 The Soviet Union had a burgeoning cinema scene at the start of the 1960's with auteurs such as Andrei Tarkovsky, Mikhail Kalatazov and Grigory Chukhray pushing the boundaries of its art by experimenting with innovative filming techniques to tell powerful and unforgettable stories. One masterpiece of this era that doesn't get the attention afforded to most of its contemporaries is Kalatazov's Letter Never Sent; a bittersweet paean to a small band of explorers seeking diamonds in the uncharted Siberian wilderness. It roots its exposition in a description of the group as pioneers, a description that those familiar with Christopher Nolan’s recent foray into space with Interstellar are likely to draw comparisons to. This is not an intergalactic journey but its story is just as epic in scope, as it focuses on the drive that pushes these pioneers to explore the extent of our natural environment for the greater good of mankind, no matter how harsh or uninhabitable parts of it may be. 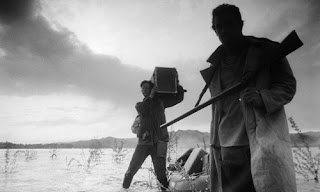 In charge of the expedition is Sabinin (Innokenti Smoktunovsky), a geology professor who pens a letter to his wife that he shares with the audience by reading part of it aloud as a narrative device near the start of the story. He is accompanied by the strong and reliable guide, Sergei (Yevgenj Urbansky), who is a veteran from the professor’s previous failed searches for diamonds, and a young and enthusiastic pair of geology students, Andrei (Vasili Livanov) and Tanya (Tatyana Samojlova), who are in love and both eager to prove their worth on this trip. From the moment the helicopter they arrive on departs they are totally isolated in the Siberian wild, and can only establish communication with the outside world via a radio link. This is an expedition that will test the very limits of human survival as a journey full of hope and ambition becomes fraught with life-threatening danger. 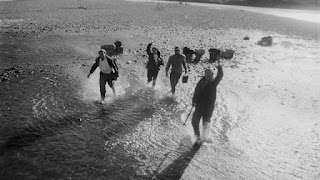 As soon as Letter Never Sent begins it is clear that you are about to watch something very special indeed. The superb camerawork seen in the opening shot as the helicopter departs from the landing area is a precursor to a visually stunning story, shot almost entirely on location in a vast array of naturally beautiful environments. There are few static shots in Letter Never Sent, and the fluid movement of the handheld camera demonstrates an impressive command of the medium. By positioning the camera amongst the explorers as they traverse difficult terrain, Kalatazov's cinematographer of choice - Sergey Urusevksy - makes us feel like a fifth member of the party; travelling with them to the edge of the world in search of endless riches and a place in the Soviet Union’s history books. Overlapping dissolves are used to heighten the intensity of the peril faced by the group when danger strikes, and many of the extended tracking shots display a bravura approach to film-making that is utterly astounding and needs to be seen to be believed. 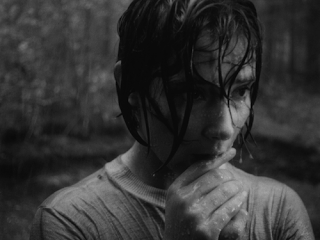 Certain scenes in which the explorers use a pick-axe to dig for diamonds clearly envisage the nation’s ideal of proletarian labourers; particularly when the muscular Sergei is pictured toiling hard, the camera kept low as it tracks his imposing torso pivoting back and forth with each blow. Striking imagery such as this creates a memorable impression whilst embodying the Soviet ideals of the time; a combination of artistic and political inspiration that was often at the forefront of the politically charged films of Sergei Eisenstein in the early days of Soviet cinema. Whilst Letter Never Sent can be enjoyed as a simple story, separate to the societal and political views of its era, there are underlying glimpses into a political agenda that add extra layers to the film for those willing to delve beneath the surface.

On a technical level, Letter Never Sent is an undeniable masterpiece. The enthralling storyline brings an emotional hook that elevates its majestic cinematography to that of high art, deepening the impact of the stunning imagery as the audience feels unconditionally invested in the outcome of the precarious expedition. When the inevitable disaster strikes, it is heartbreaking to watch as the group struggle against the odds to make it out alive. The breathtaking scenes that unfold pitch the volatile nature of the elements against the intrepid pioneers who will stop at nothing to bring home glory for their nation. 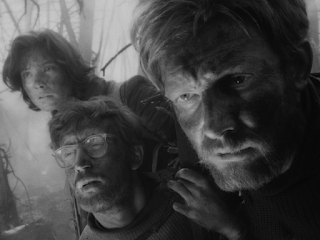 Kalatozov’s most well-known films Soy Cuba and The Cranes are flying are just as remarkable as Letter Never Sent, although both are far more revered than his unforgettable but overlooked adventure, which is why my focus landed on it for this feature. I cannot recommend this spectacular achievement of Soviet Cinema enough, and I hope that the experience of watching such a magnificent film inspires you to explore more of Kalatozov's stunning filmography. If you find yourself as enamoured with the greatness of Letter Never Sent as I am, then make sure you spread the word of its brilliance to others who share a passion for masterful cinema.

If you take the time to watch Letter Never Sent then it would be awesome if you could also take the time to let me know what you thought of it, either by commenting below or tweeting me @filmbantha. Thanks, and enjoy!


For previous instalments in the series click here
Posted by Filmbantha at 08:57