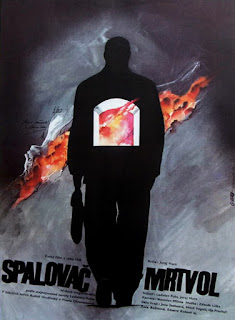 Cremating human bodies is a rather unappealing profession, which raises alarm bells when we meet Kopfrkingl (Rudolf Hrusinsky), a cremator who seems to take far too much pride and enjoyment in the self-proclaimed ‘crucial’ role he plays in society. Set during the build-up to the outbreak of World War Two, Kopfrkingl heeds the advice of an old war friend to be as ‘Aryan’ as possible in the pursuit of self-preservation and to further his career. This prompts a troubling conundrum for the cremator, as his wife is Jewish and they have a son and daughter who exhibit characteristics of the race he is eager to distance himself from.

For a man who burns dead bodies almost daily (and eloquently vents his frustrations that society doesn’t condone cremating on Christmas day), Kopfrkingl is incredibly relaxed and assured. He is a presentable and polite man, even if the views he develops are a huge cause for concern, and he remains calm in any given situation. When the cremator begins to demonstrate the behaviours of a psychopath it doesn’t come as a surprise; his demeanour is peculiar from the outset, and his morbid fascination with death leads him to believe that he is the saviour for all who enter into his sacred crematorium. 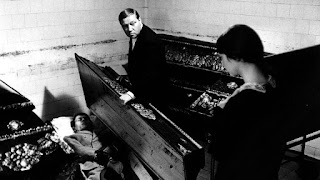 This is a dark and disturbing film that has perhaps been unfairly labelled with the horror genre over the years; yes - the situation is horrific, but the approach taken by director Juraj Herz is more akin to that of a surreal black comedy. Those expecting a traditional horror could be disappointed as this is not a scary film, even if the warped art house sensibilities do have their roots in the macabre and the storyline is deeply unsettling. The care and attention taken in the delivery of this twisted tale makes it a worthwhile viewing experience for those who approach the film with an open mind-set, providing you are not jaded by the labels given to it by others that can lead to inaccurate presumptions being made.

When the film starts the musical accompaniment is a sombre symphony; the perfect partner to the funereal atmosphere that pervades the crematorium parlour. This solemn sound evolves into a surge of pomp and circumstance, chiming with the cremator’s rise to power as his desire for success propels him into the limelight of the Nazis. From Kopfrking’s own perspective his character arc may be a crescendo of glory but it is a bleak and horrifying tale for outsiders. Thus the soundtrack is fitting for its main character but it is in stark contrast with the emotional journey experienced by the viewer. 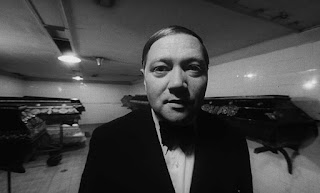 At key moments in the film, particularly during stunning scenes inside the heart of the crematorium, Herz distorts our view with the use of a fish eye lens. This hints at the warped view Kopfrkingl has of the world and exaggerates the strangeness of his outlook on life, as well as emphasising the intensity of these unnatural moments by making the audience feel uneasy and off kilter. A sequence in which he heartlessly pursues an unfortunate victim through his stacks of coffins features mesmerising cinematography, combining a beautiful vision with disturbing actions in an amalgamation of contrasting moods that is both provocative and fascinating to behold.

With the story taking place in a testing time for the Czechoslovakian population, Herz delves deep into the political and social upheavals of the time, and does so in a manner that both intrigues and educates. It is frightening to witness the blind faith that guides those who believe in the final solution and the lengths that individuals will go to in order to secure their own successful future. The final haunting scenes evoke an overwhelming sense of dread; we have witnessed the full extent of the cremator’s insanity, and although it is a fitting finale, it is one that makes your skin crawl as it leaves a lasting impression of a cruel and unforgiving time in history.


If you take the time to watch The Cremator then it would be awesome if you could also take the time to let me know what you thought of it, either by commenting below or tweeting me @filmbantha. Thanks, and enjoy!