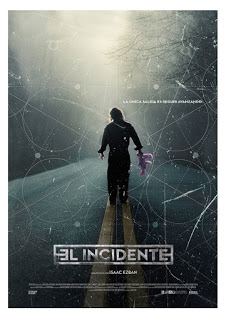 For every big budget sci-fi film that is released, there are dozens of independent science-fiction features that fly under the radar. A lot of these have more ingenuity than their mainstream counterparts as the creative teams behind them do not have the funds or tools available to those working within the studio system. They rely on intelligent storytelling rather than the grand scale of explosive space battles or monumental world building to draw in their audiences.

The Incident is one such high concept sci-fi film; a stunning directorial debut from Mexico with a fascinating central concept involving time slips, that becomes a philosophical parable on our very existence. Like an episode of The Twilight Zone, or perhaps even a storyline from Charlie Brooker's celebrated series, Black Mirror, the audience is introduced to a strange and intriguing mystery. This mystery is as puzzling for us as it is for the main protagonists. It slowly unravels as we learn more about the unnatural phenomenon that unexpectedly traps its victims in a time loop.

Brothers Carlos and Oliver are the first to fall foul of this life-changing incident when fleeing from an armed police officer down the stairs of their apartment block after an altercation in their flat on the tenth floor. Upon reaching the first floor stairwell they head down to what they think is the ground floor only to emerge once more on the tenth floor of the building. This bizarre occurrence appears to loop indefinitely, leaving the brothers and their pursuer trapped in the stairwell, in a never ending cycle. Their frustration and confusion soon turns to fear as they realise the stark implications of their predicament, and it is at this point that the story line segues into a new chapter where another strange incident is about to take place.

In this sequence a family of four are setting out on a long drive to visit the children's biological father when they too become stuck in an infinite loop on a barren stretch of road. Here tragedy strikes and the remaining family members struggle to cope with their strange new existence. These intertwining stories are both incredibly compelling, and the crescendo to their eventual union is a revelation that will undoubtedly prompt much introspection. Elements of the denouement may raise more questions than the answers it provides but this is often the case with challenging science-fiction, and it allows imaginative viewers to offer up their own interpretations of the strange events that transpire within The Incident.

Where The Incident really succeeds is when we are transported thirty five years into the future to find the protagonists in both story lines still trapped in the same never ending time loops. Unlike in Groundhog Day where the whole world seems to reset at the end of each day, here the character's actions have consequences that impact on their subsequent days, and it is fascinating to see how they have grown accustomed to their new environment. They have grown older and the empty food wrappers and drink cans they discard each day have created mountains of rubbish. Efforts to comprehend their strange new existence are scribbled on the stairway walls. Occasionally, distant memories of their previous lives ignite ideas on their incarceration that fade away before coming to fruition.

The Incident is a heavy mind trip - one with much food for thought - that sidesteps the usual flaws of films on this subject matter by creating its own rules and philosophies. It draws you in with its intricate conceptualisation that leaves you second guessing and hunting tirelessly for clues to explain the unique predicament of those imprisoned by the bizarre phenomenon. The journey towards the film's conclusion is perhaps more intriguing than the end destination is satisfying but The Incident is still a rewarding and challenging sci-fi, with enough enthralling ideas to leave your head in a spin, fearing the inevitable passage of time towards old age.


If you take the time to watch The Incident then it would be awesome if you could also take the time to let me know what you thought of it, either by commenting below or tweeting me @filmbantha. Thanks, and enjoy!

For previous instalments in the series click here
Posted by Filmbantha at 18:05