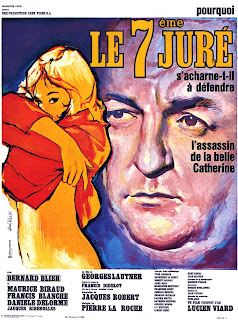 The shocking opening scene of The Seventh Juror sets the tone for this captivating character study of a murderer without a motive, Grégoire Duval, a pharmacist whose respectable standing in the community leads to him being appointed as a juror for the trial of an innocent man accused of the very murder that he committed. Bernard Blier takes centre stage as Duval, fixating your attention from the moment he arrives on screen. His character's brief moment of madness is displayed in full when Duval takes the life of a lone woman sunbathing by the side of a lake while a pervading violin sound tangles with your nerves, heightening the impact of this staggering scene. After the murder, the intense violin accompaniment ceases abruptly (perhaps an indication that Duval is at peace after quelling an unnatural instinct to commit a heinous crime?) and Duval returns to the lakeside bar where his unsuspecting family and friends are completely oblivious to his short-lived absence. 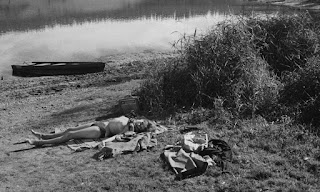 Throughout these gripping establishing shots the slow and measured camerawork heightens the mood as the visual aspects of the film draw you in, with silhouettes of lone fisherman across a fog-shrouded lake serving to enhance the mysterious atmosphere. This is an imposing and hypnotic picture comprising countless spellbinding sequences as Duval navigates the ethical quandary of his position with a surprising amount of ease thanks to his devious nature. An inner monologue reveals Duval's internal struggles and invites us to be complicit with this wretched murderer as we learn about his past demons. In one mesmerising instance where Duval reminisces about former lovers we see his distorted reflection in a wine glass; it feels like he is looking into a crystal ball to remember his youth but the twisted appearance of his features also suggest that he has warped into a monstrous killer. These beautiful scenes showcase the meticulous work of the film's cinematographer, who conjures up a wealth of beguiling imagery and manages to maintain the sense of an alluring spectacle even as the action relocates to the clustered confines of a busy court room. 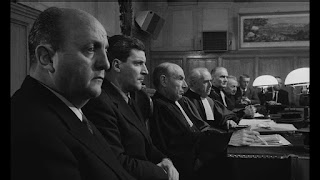 As the courtoom fills with each passing day, Duval grows in confidence and Blier's portrayal of the killer as a cold and lifeless soul - who is nevertheless driven and determined when it comes to dissecting the finer details of the case - is nothing short of astonishing. Blier is superb at masking his character's emotions, so much so that it is unlikely we would ascertain Duval's true intentions were we not privy to his deepest admissions. No-one suspects that Duval could be culpable of such a crime and he even begins to revel in proving the judge and defending lawyer to be wrong - using his inside knowledge of the incident to gain favour in the court.

It is said that the killer always returns to the scene of the crime and in one striking scene
Duval invites the whole court room to reassemble by the lakeside, as he is emboldened by the direction of the court's proceedings. Inventive flourishes in the storytelling such as this establish The Seventh Juror as an incredibly compelling film that is primarily a dark crime thriller but occasionally flirts with elements of black comedy when you least expect it. The waves of disbelief that greet Duval as he tries to atone for his sins only exacerbate his downward spiral, yet he remains predominantly calm and composed on the outside. We begin to suspect that it is only a matter of time before he puts a foot out of place and there is a wicked sense of glee in anticipating whether this moment will ever arrive. 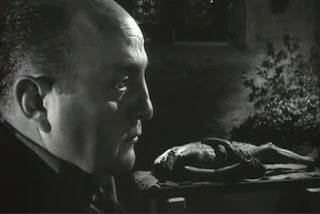 Religious symbolism plays a powerful part in the storytelling (Duval's bed even has a sculpture of Mary hanging over it) and there is an evocative callback during Duval's visit to a church when he gazes upon a statue of Christ in a pose that bears an uncanny similarity to the frightful position of the lifeless body of the woman he strangled by the lakeside. Moments like this demonstrate that the protagonist is wrestling with his conscience and struggling to escape from the guilt that consumes him, a factor that makes his character so fascinating to watch, especially when his wife's admiration for the invaluable contributions he makes in court begins to shift to suspicion. 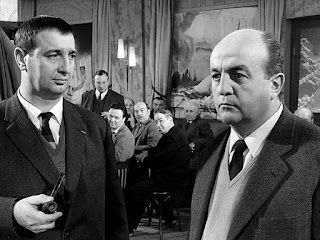 Director Georges Lautner has crafted a remarkable crime film and it is difficult to fathom why such amasterful work of art has slipped into relative obscurity. Perhaps this stark portrayal of an impulsive murderer was ahead of its time as The Seventh Juror has lost none of its power to shock and astound the viewer, particularly when the crescendo of revelations towards the finale leaves you emotionally drained and exasperated. As well as being capable of impacting the viewer on a visceral and emotional level, The Seventh Juror is undeniably engaging due to a sublime central performance from Blier and sumptuous visuals that elevate this courtroom drama to the realm of an unforgettably haunting psychological thriller.

If you take the time to watch The Seventh Juror then it would be awesome if you could also take the time to let me know what you thought of it, either by commenting below or tweeting me @filmbantha. Thanks, and enjoy!


For previous instalments in the series click here
Posted by Filmbantha at 12:29