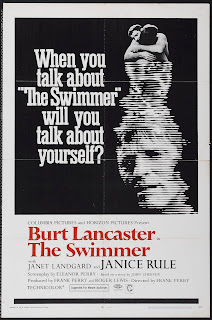 The cinematic landscape is populated with emotionally stirring journeys; four boys travelling across train tracks in the search for a dead body, a dying man travelling hundreds of miles on a rusty old tractor to reconnect with his estranged brother, and a daring mission through space for astronauts seeking a new home for earth's dying population. I imagine that the descriptions of these films will be recognisable by most film fans but I often wonder how many are familiar with the captivating journey one man takes across his neighbour's swimming pools to reach home?

This novel idea about a man who decides to swim through all the pools in his neighbourhood on a glorious summer day is transformed into a magnificent parable on loneliness and depression in Frank Perry's The Swimmer. Burt Lancaster stars as Ned Merrill, an incredibly jovial and charismatic individual, who brightens up the days of all he encounters on his fascinating and enthralling journey through an affluent area of Connecticut. Along the way we begin to see the cracks in Ned's facade as we learn more about his troubled past and the ongoing battle with his personal demons. The swim back home is not only a test of his physical strength and endurance but also a huge challenge for Ned's emotional state of mind. With the heat bearing down and the alcohol offered out by his neighbours flowing fast, the day soon descends into an overwhelming cacophony of emotion for Ned Merrill, giving us a chilling insight into the stark existence of a man drowning under the weight of regret. 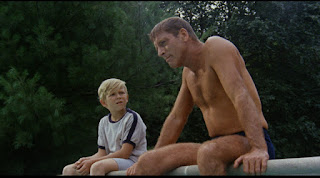 Lancaster's Oscar-worthy performance is a powerful tour de force that anchors the story with an endearing central character who is engaging from the very first moment he appears on screen. His provocative yet beguiling monologues expose the audience and those he meets to some of his deepest admissions, acting as a way in for us to understand his motivations and outlook on life. However, it is clear that Ned is still holding something back, and as the days end draws nearer, his outlook begins to shift.

For the whole journey, apart from a candid moment where Ned removes his swimwear, he is seen only in his swimming trunks. An aging yet athletic man, well chiselled with a muscular physique, cutting a dashing figure that captures the curious gaze of many ladies he meets on the way and the admiration or possibly even jealousy of the men he encounters. This embodiment of the male form is seen emerging from the undergrowth at the start of the film and is captured by the camera in a way that evokes companions to a Greek adonis, a comparison that is firmly established when we see him racing alongside a horse through a field or swimming with the grace of a dolphin. On the outside it would appear that everything is fine but underneath the surface Ned is struggling with a host of insurmountable feelings that cannot be tamed or shut away from the world. 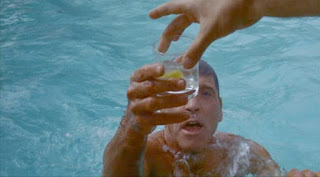 As Ned's outlook shifts we see this reflected in the alluring camerawork; stunning shots of the sun's rays glistening through the foliage and enchanting scenes that linger over subtle movements in the reflective surfaces of pool water eventually give way to abrupt fast paced cuts that echo the turmoil and distress of our protagonist. There are moments of serene beauty that are utterly mesmerising and showcase an impressive command of the medium, particularly when Ned is alone with a carefree young girl as they take in their natural surroundings like Adam and Eve exploring the garden of Eden. These cleverly crafted scenes bring a welcome depth of meaning as the editing and camerawork is clearly indicative of Ned's emotional state. A graceful and harmonious score is employed by Perry that follows suit in this manner, becoming louder and more agitated as the journey progresses. Its subdued melodies grow into a full blown symphony of sorrow; stirring up an array of emotions as we become more and more invested in the heart-rending story of The Swimmer. 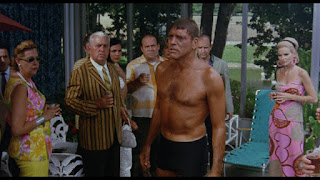 This is a powerful and compelling tale of a man who is unable to come to terms with his past and an emotionally charged journey that is genuinely affecting. In Burt Lancaster, Frank Perry found his perfect leading man, a man capable of carrying the intense weight of his character's burden and elevating his tribulations in a way that demands your utmost attention, even when your investment in the character falters as his true nature is slowly revealed.

The Swimmer is a sumptuous and rewarding film that will haunt you long after its journey reaches an end. Its unique and timeless treatment of an enthralling subject is an exceptional piece of film-making that remains as powerful and relevant today as it would have been when it was released over fifty years ago - an essential classic that deserves a home in every cinephile's collection. As the film's memorable poster asks: "When you talk about The Swimmer, will you talk about yourself?"

If you take the time to watch The Swimmer then it would be awesome if you could also take the time to let me know what you thought of it, either by commenting below or tweeting me @filmbantha. Thanks, and enjoy!


For previous instalments in the series click here
Posted by Filmbantha at 21:46