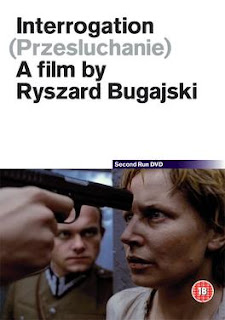 
Films that make powerful political statements about the ruling authorities of the countries where they are made can fall foul of censorship or even be banned outright. Interrogation is one such provocative picture that became a political prisoner in its native Poland and was banned for its bold stance against the communist party and their extreme methods of probing those suspected of working against the state. Although this bleak and potent tale of a woman caught up in the horrific communist prison system was completed in 1982, it was not made widely available until 1989 following the dissolution of the communist party in Poland. Its harrowing subject matter paints a deeply disturbing view of a country in political turmoil after WW2 and it comes as no surprise that the graphic and troubling content caused such a stir with the authorities.

Krystyna Janda takes on the lead role of Tonia, a cabaret performer who is kidnapped and imprisoned by two charming men who take her out drinking after she argues with her husband during a show. Tonia’s confusion at being imprisoned turns to frustration and then total disillusionment as the severity of the situation sinks in. Janda’s dedicated performance is a phenomenal piece of acting that showcases the devastating effects caused by the years of abuse and suffering Tonia endures at the hands of her captors. Both the violent methods of torture and the psychological games that are thrust upon Tonia weigh heavy on her soul and Janda evokes her character’s distress with an unsettling realism as the never-ending torment shatters her spirit. 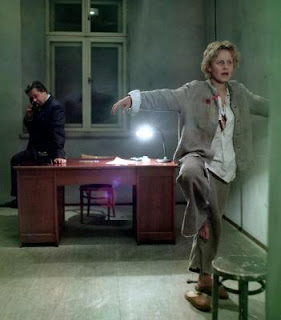 The two officers responsible for dishing out the barrage of cruel mind games are depicted as insensitive and abhorrent men. They offer Tonia brief moments of respite and kindness only to then withdraw back into their interrogation methods; providing her with a glimmer of hope only to subsequently snatch it away from her grasp. Through this interrogation we learn of the tenuous reason behind Tonia’s incarceration and this highlights how almost anyone living in Poland during the era represented could have been considered a suspect of conspiring against the state if the powers that be deemed them so. This is depicted by the scores of women in a similar predicament to Tonia who crack under the mental strain and confess to made up crimes in the hope of easing the abuse from their captors.

This depressing and horrific journey through a hellish prison system is a visceral and challenging experience for any viewer. Constant screams and moans litter the background along with disturbing pleas for help and cries of pain that crush your tolerance for the relentless brutality and humiliating punishments that are shown on screen. These political prisoners are accused of crimes against the state, but the guards are punishing them with crimes against humanity; using debasing methods of torture that should have been confined to the bowels of history a long time ago. The never-ending barrage of misery is a tough notion to digest and is likely to leave you as exhausted and drained as those suffering at the hands of the evil oppressors who drive this twisted regime. 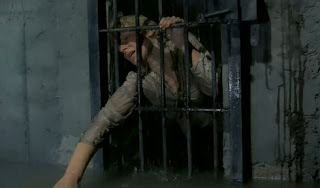 By exposing the atrocious conditions and the inhumane treatment people were subject to during this troubled time in Poland’s history, Director Ryszard Bugajski, took an incredibly bold risk to deliver his damning indictment of the Stalinist Pro-Soviet regime and their extreme interrogation methods. His heart stopping film slams the actions of those involved so hard you can imagine there would have been a public outcry had this been released when the communist party were still in power. The chilling statement his film makes becomes even more disturbing when the devastating denouement shows the psychological damage has also taken its toll on the officers in charge of the interrogation. The extremity of the situation tears apart the lives of people on either side of the fence in what amounts to a tragic waste of human life.

It is difficult to sway the sweeping anger that stirs inside when watching Interrogation. The overwhelming sense of injustice and disbelief at the abject inhumanity rouses up like the unstoppable wave of panic and fear that grips Tonia and leaves her in an almost catatonic state. Few films are capable of drumming up such fierce reactions in the viewer but Bugajski pushes and provokes us relentlessly in his visceral demonstration of suffering that is intended to act as a stark warning on the abuse of power. Those who endure the entire ordeal will emerge scarred and broken, reeling from the savage impact of this remarkable film. Its raw power is a testament to Bugajski’s talent as a Director and the phenomenal display of acting prowess he coaxed from his leading lady is the performance of a lifetime. Take heed if watching this film; its crushing misery will remain with you forever, but this is one of the reasons why Interrogation is such an important landmark in the fascinating landscape of Polish cinema.

If you take the time to watch Interrogation then it would be awesome if you could also take the time to let me know what you thought of it, either by commenting below or tweeting me @filmbantha. Thanks, and enjoy!