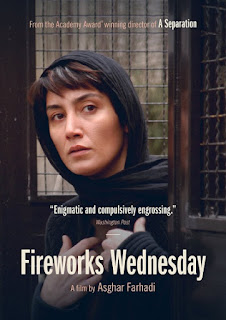 Prying in other people's affairs and indulging in idle gossip can cause unintentional hurt and upset, especially when false assumptions are made because the truth is shrouded. This is one of the enthralling conceits that is explored in Asghar Farhadi's tempestuous drama, Fireworks Wednesday, which follows a soon to be married Iranian lady, Roohi (Taraneh Alidoosti), who takes a cleaning job at an apartment for Morteza (Hamid Farokhnezhad) and Mozhde (Hediyeh Tehrani), a husband and wife on the verge of splitting up. Through the course of a single day we are drawn into a web of lies and deceit instigated by Mozdhe's suspicion that her husband is having an affair with their next door neighbour, Simin (Pantea Bahram) - a single woman who is using her apartment as a beauty salon against the wishes of their landlord. We witness the emotional trauma and fallout as Roohi becomes embroiled in the couple's lives and her inquisitive nature interferes in an already uncomfortable situation that exacerbates as the day progresses. 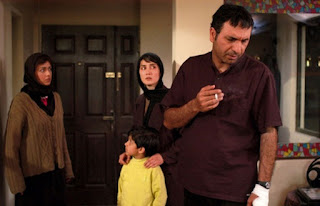 During the introduction to this gripping drama we see and hear only that which Roohi does, leaving us as intrigued and curious about the couple's problems as she is. We learn that their heated arguments are often overheard by the neighbours and their young son, Amir (Matin Heydarnia), who is distressed by the constant bickering between his parents. It is unclear if there is growing resentment between Morteza and Mozhde due to an affair taking place or if Mozhde's suspicions are unfounded, but there are obviously some unresolved issues which are driving them apart. Roohi comes into this situation blind and, although she tries to help those who show her compassion, her meddling in that which she does not understand leads to more harm than good.

Alidoosti is sublime as the young bride to be, whose unsubtle attempts at eavesdropping entangle her in the quarreling couple's duplicity. She provides her character with a real sense of naive charm as we see Roohi trying to uncover the truth without causing any more hurt. The torment suffered by Mozdhe as she grapples with her husband's assumed infidelity is portrayed with a raw intensity by Tehrani. The devastating blows and setbacks she experiences are handled adeptly by Tehrani, imbuing her emotionally drained housewife with the anguish you would expect to see from a woman in such an uncompromising situation. 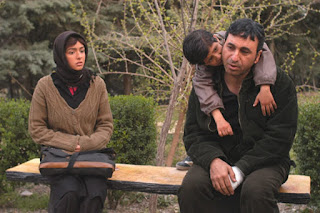 There are elements of unlikeable characteristics within most of the people we meet in Fireworks Wednesday, due to the very nature of the subject matter, although none more so than Morteza. His cold and hostile treatment of Mozdhe pushes her to the end of her tether, and Farokhnezhad demonstrates Morteza's ruthless behaviour with a chilling depiction of a volatile and careless husband. We are exposed to his tender side in a crucial scene that shows Morteza has a heart, even if its path is misguided, and the strain this has on his marriage echoes in his actions as pangs of regret bubble away under the surface.

The neighbour Mozdhe suspects her husband is having an affair with, Simin, is a mysterious character but she takes a shine to Roohi, who poses as her niece to prevent drawing attention to her illicit business venture when the landlord visits during a beauty treatment. Simin is completely unaware that Roohi has been sent by Mozdhe to probe for clues, and this incident kindles a friendship forged on lies and only serves to muddy the waters further in Roohi's search for the truth. 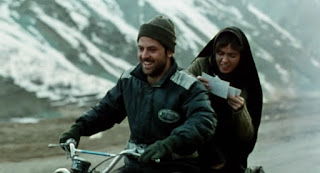 With the drama unfolding close to real time over the course of a single day we are pulled into a world of lies and deceit where people become victims of their own undoing and we become firmly invested in their plights. This harsh and poignant portrayal of a marriage in crisis is a superb vehicle for a remarkable cast of actors at the hands of an accomplished director, and the stark realism of Fireworks Wednesday is a credit to the talent involved.

Although most of the action is confined to the couple's apartment complex there are a number of striking scenes taking place elsewhere. A beautiful sequence at the start of the film shows the enchanting symmetry in a reflection of Roohi's hand as she drifts it through the fresh air outside of a bus window. A haunting incident at Morteza's place of work is tied inextricably to the movement of the building's lift as the camera mimics its descent and rise in a striking use of framing. These moments offer inventive imagery that serves to highlight Farhadi's impressive grasp of the medium, and help to bring his storytelling to life in a way that resonates both visually and emotionally. 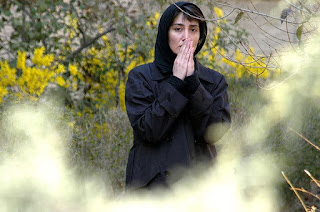 It is telling that the Fireworks caused through human interactions are far more exciting than the actual fireworks we see, and these explosions of rage are matched in intensity by the compelling scenes in which characters face up to the truth, no matter how difficult this may be. Fireworks Wednesday is a real gem of Iranian cinema; this is a film that encompasses all of the hallmarks of a powerful and stirring drama, with a delicate touch that enables the stories subtleties to seep into your conscience as you ponder the beguiling creation of a master film-maker at work.

Farhadi has been crafting intricate and suspenseful character studies for much of his illustrious career and reached international acclaim with his Oscar winning film, A Separation (2011), that explored many similar themes to Fireworks Wednesday. His films offer a fascinating insight into Iranian society and the tragic human dramas he depicts can be as enthralling as they are devastating. Fireworks Wednesday stands out from his other earlier forays into film with its masterful storytelling and emotionally engaging performances from the leads, whose passionate renditions enhance its crushing impact.

If you take the time to watch Fireworks Wednesday then it would be awesome if you could also take the time to let me know what you thought of it, either by commenting below or tweeting me @filmbantha. Thanks, and enjoy!


For previous instalments in the series click here
Posted by Filmbantha at 12:18